The Largest Gallery in Los Angeles 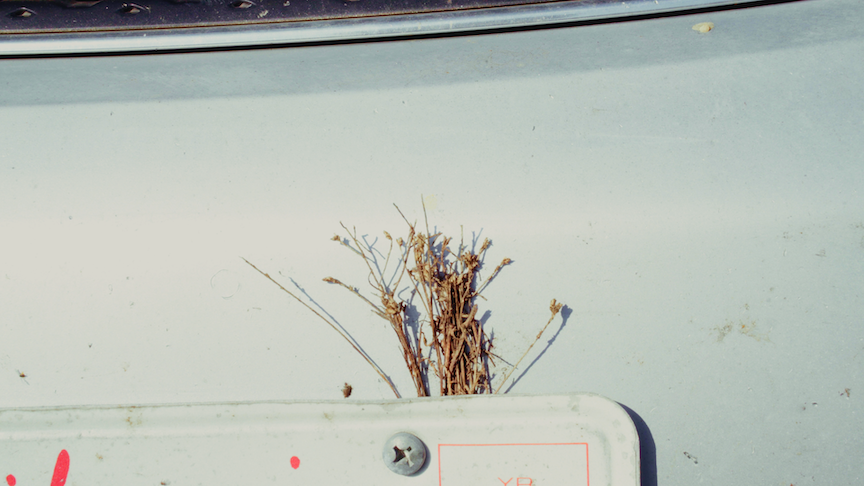 Congratulations on nearing completion of your film Pasture, 2017-2022! The essayistic non-fiction film revisits a grassroots movement in the Southern California borderlands that fairly successfully resisted the construction of a massive military training facility in their area. Their struggle is depicted alongside elements of your own experience, readings from transfeminist philosopher Sayak Valencia, and some more performative elements.
In your time learning about the movement in Potrero and through your relationships with the organizers what did you learn about the work of resistance? The coalition was made up of many intentions and viewpoints – is there something to be learned about galvanizing many experiences and beliefs towards a common goal?

In Potrero it seemed like a David and Goliath story. Blackwater, a powerfully connected private military company, was proposing to develop a big facility in a rural, high desert border town of less than nine hundred people. Blackwater had just been granted a huge contract with the U.S. Navy to develop new facilities, and they had just incorporated “border security” into their mission statement. So, this was part of my initial interest in learning more about what happened: how were residents and activists in and around East County able to prevent development when they were up against such a powerful force?
‍
The stories and reflections I heard from activists conveyed a wide range of concerns for what has already happened to the land and to people living here and what is continuing to happen around the border wall, which was in construction while I was filming, and regarding water supply. People also shared a wide range of concerns about what could have happened, if there were to be this kind of training facility here. There would be even more fires, even more attacks on people crossing the border, even more corporate loopholes opened and corners cut by the county, even more guns, even more PTSD. In terms of organizing strategies, reflections about the success of the movement against Blackwater have emphasized a couple things. One, as you said, people working to fight development across social and political difference. And, two, using environmental impact reports to animate how anything that is destructive for the land and for ecosystems is also bad for people.
‍
This was kind of an unlikely or unsexy story to follow. A lot of what happened was already ten years in the past when I started, and in the intervening years there’s been a lot more development, which might make the success of this particular struggle seem less significant. The coalitions that formed to fight private military development in East County and Imperial County in the mid-2000s were predominantly older folks, including older white residents of rural border areas who sometimes said xenophobic things. Private and independent militias have long legacies in the history of environmental destruction and settler colonialism in the border region, where state-sanctioned violence, in its many forms, has always been anti-Indigenous and xenophobic. I say this here because I think something that happened when I asked people to reflect was this kind of longer, historical reflection. Looking to the recent past prompted looking back further: to understand the particular stakes of private military development (and the fight against it), it’s helpful to consider how deep “development” goes. The work of Roxanne Dunbar-Ortiz and more locally, Sayak Valencia, Liliana Falcón, and Mike Davis, among others, are really helpful here.
‍
I would just also add, thinking about your question about learning, that I was arriving here as an outsider with my own political questions and projections that were complicated as I spent more time here, and, to be a little corny about it, as I spent more time with myself. I was a couple years into transitioning and a lot was unraveling and reorienting for me personally. These tensions became the film. Covid arrived as I was in the early stages of editing, and then I stopped working on the project for more than a year before returning to it. In the end, the film is, I hope, attentive to conflicting voices and to dynamics on both sides of the camera, invested in questions about how stories of resistance are remembered and told. 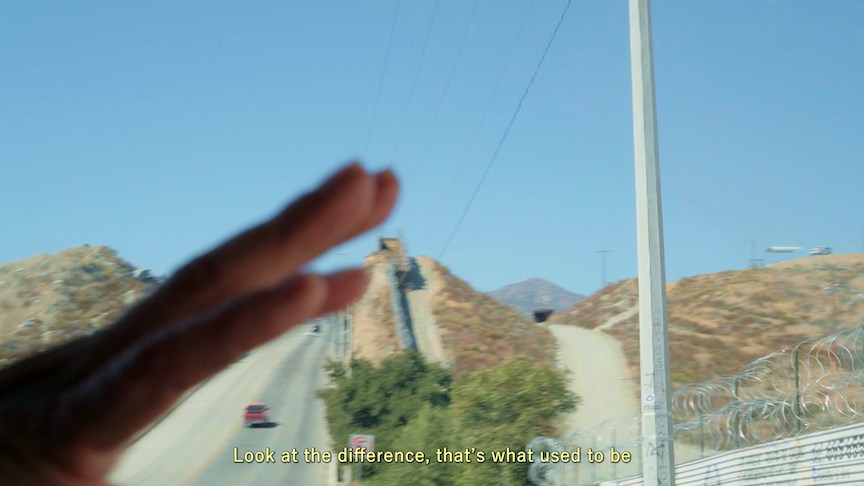 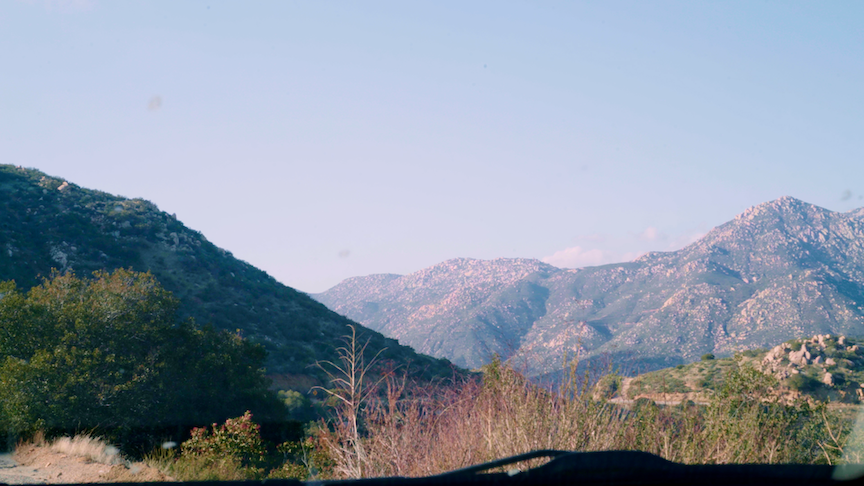 I think you are doing some things that journalism fails at – you’re able to fold in empathy and personal experience and skirt corporate agendas. What’s your relationship to journalism?

I’m grateful to investigative journalists and community journalists in similar ways that I’m grateful to social documentarians and oral historians. I have learned a lot from engaging with these disciplines, most recently from a workshop I participated in through Oral History Summer School, facilitated by Suzanne Snider. With Pasture, I wanted to find a way to talk about how embedded mercenary warfare and private military are in this place without it feeling either super cynical or super masc. Journalistic reporting on the military can sometimes reproduce the hyper-masculine effects that the military already embodies. That’s not my voice, and I don’t think anyone needs me to reach for it.
‍
At the same time, I’m cautious about the way that empathy may be linked with liberal humanist discourses. Mostly, I’m cautious that sometimes when people talk about empathy in films or stories, it’s in ways that privilege the most familiar kinds of protagonists and the most familiar forms of intimacy. I look to practices that take the work of making a film as an opportunity to gather, to spend time in particular relationships, to listen differently, and to reassess what is and isn’t known. My dear friend and collaborator Sindhu Thirumalaisamy has taught me a lot here. In 2019, in the same months I was filming, I got to attend the Flaherty Film Seminar as a fellow. Spending time with the work of filmmakers invited by Shai Heredia taught me a lot, especially films by Chan Hau-Chun, Priya Sen, and Miko Revereza. Like many of the films by these filmmakers, I worked on Pasture without a production budget. I was a student in a funded MFA program when I began the project, and so I had access to some equipment and health insurance, and I had time and a framework to ask myself questions.
‍
My work is increasingly motivated by wanting to find ways to listen closely, to listen for difference and rupture, and to allow for ideas to change — including my own ideas, and the relationships around the work. I’m not sure that industry conventions in journalism or documentary filmmaking always support that kind of listening, change, or growth. 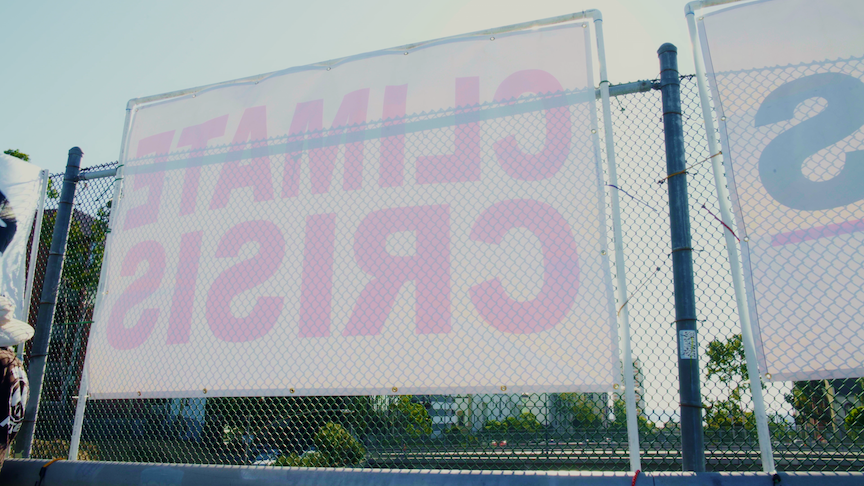 Your video Bad, 2019 in which your mother tells us what is “good” and “bad” made me think about subjectivity. Your work often invites us to stay in complex gray areas – What’s your relationship to truth? Can it be found at all?
I think I’m most interested in truths that emerge within relationships and over time. I often return to Trinh T. Minh-ha’s work, and the ways her films and writing challenge binary ways of thinking and linear narratives of progress. Over several decades, Trinh has committed to challenging binaries: working against a binary opposition between documentary and fiction, between theory and poetry, in ways that enable an expansive and receptive approach to self and other.

In the past few years, I’ve gotten to know my mom, Lisa, a bit better. She has a pretty good feel for tragicomedy and making videos has helped us have fun together. I think it’s also helped me reflect on the social and cultural values I was raised with — which, like probably a lot of people, were somewhat conflicting.
‍
Bad came out of my mom and my shared tendencies to catastrophize, and also observations about how differently we experience the world. We decided a good place to film would be the block on 14th Street near Union Square in Manhattan, where there’s a Best Buy and Whole Foods. We took one take, two shots, Lisa riffing on everything she thinks is bad, as it occurs to her. She snuck in some thoughts about what is good. A lot of artists I admire use humor or play and work within family relationships to approach serious stuff, like Hazel Katz, Geo Wyeth, and Jordan Lord, among others. 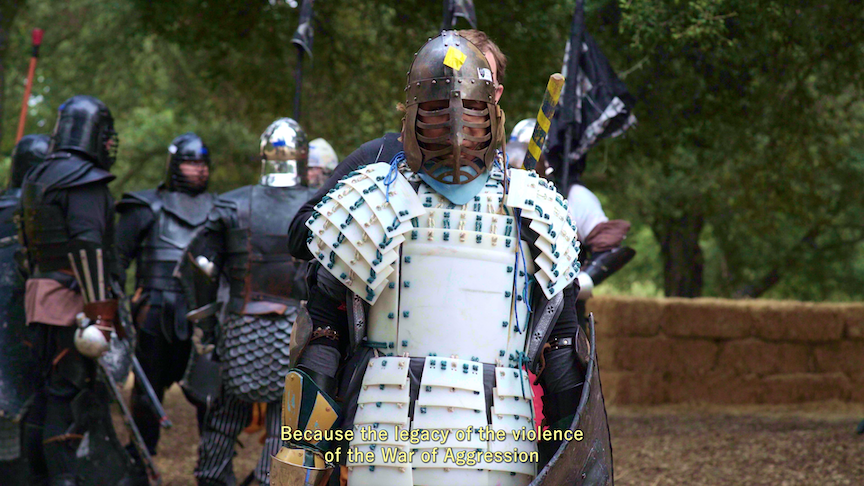 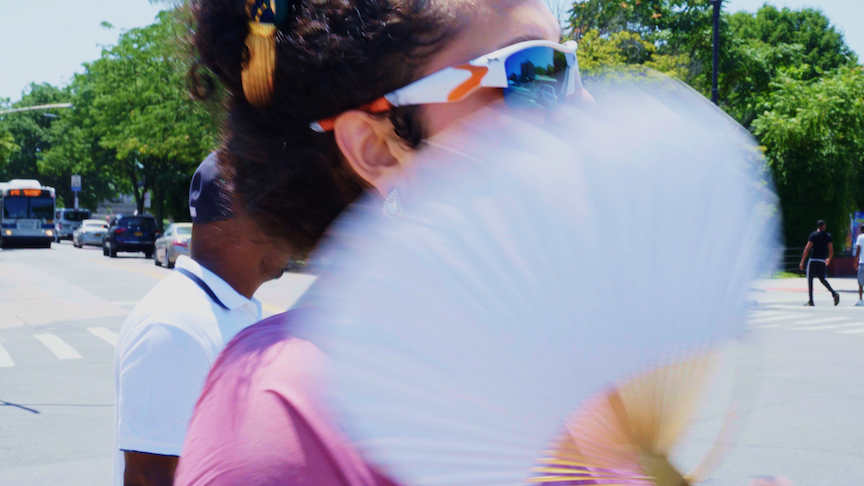 In Instrumental, 2018 you worked with airport security workers who are also singers – you found so much vulnerability that it’s almost uncomfortable to watch. What was the impetus in finding singers at the airport?
‍
I was interested in how singing could help us listen differently in the psychically and politically noisy space of the airport. I did a couple projects with security workers in different kinds of institutions, inviting them to reflect and riff as performers on what it’s like to work in security in an airport or museum or school.
‍
When I was a student in undergrad I worked as a gallery attendant at the Smart Museum of Art at UChicago. Working as a gallery attendant led me to work as an educator: while I was monitoring the museum with the headset I listened to the school groups that would come in, which gave me the idea to try to work with young people. That job also helped me think about the work of observation-making, which has been important for the kind of art I became interested in.
Like with a lot of projects, at the airport what became more compelling changed when I started recording with people. The act of singing is powerful. I love collaborating with singers and hope to do this more in the future. I’m grateful that I got to collaborate with the vocalist and artist Hillary Jean Young on the music for Pasture, and to write for an opera singer in my collaboration with Jelena Jureša. Recently I have been engaging with JJJJJerome Ellis’s vocal performances and writing online, which I really love. 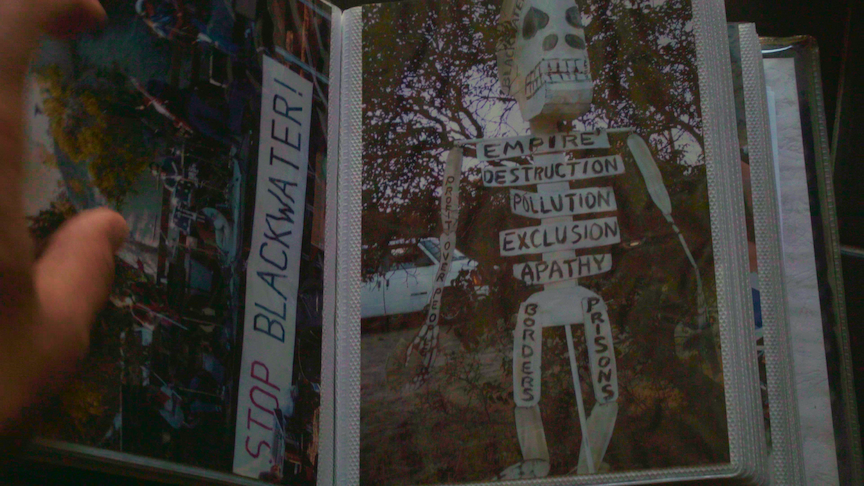 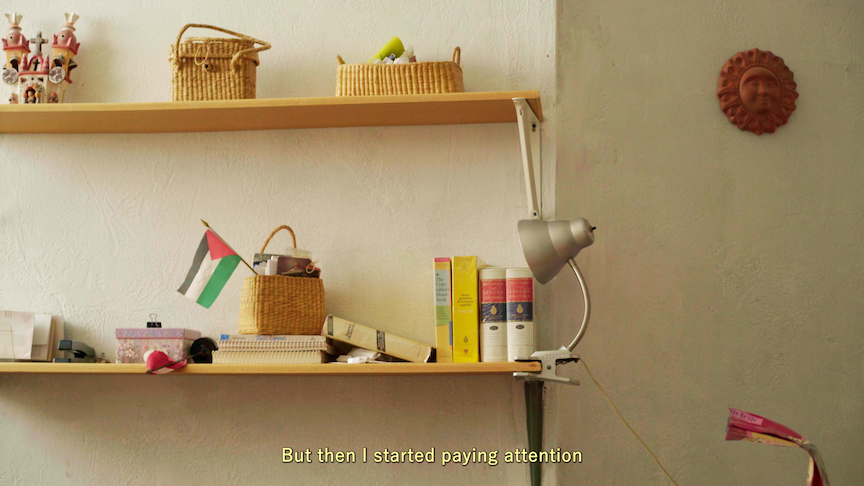 Writing (librettos, scripts, criticism) and teaching are big parts of your practice. You’ve been teaching gender and sexuality courses, at UC San Diego and more recently at CUNY, and you work as a teaching artist with the Center for Urban Pedagogy, where you recently produced a film about gun violence in The Bronx with an entire 11th grade class. Does teaching and working with young people influence the other parts of your practice?
‍
Yeah, definitely. I’ve worked as a teacher in different contexts and capacities for about thirteen years now, but in the last few years, working with younger people, and with young queer and trans people in particular, has become more and more meaningful to me. I see myself continuing to lean into this work over the next years.
Bio

Asa Mendelsohn is an artist, writer, and educator motivated by transfeminist politics and possibilities for transformation through close listening. Exhibitions and screenings include Kunsthalle Wien, Künstlerhaus Halle für Kunst und Medien, The Blanton Museum of Art, and Anthology Film Archives. A recipient of an Andy Warhol Foundation Arts Writers Grant and a Fulbright Fellowship, Asa has written screenplays and librettos for Ubundu and Aphasia (dir. Jelena Jureša) and essays in MARCH International, Social Text, Sounding Out!, Momus, The Brooklyn Rail and elsewhere. Asa currently teaches at Guttman Community College, City University of New York, and with the Center for Urban Pedagogy.‍
Katherine Harvath is an artist, curator, and art worker based in Chicago. She is interested in finding meaning in material and form. Quick gestures, familiar objects, the history of painting, and the semiotics of color all play a role in her painting and sculpture. Harvath received her MFA from the University of Chicago in 2013 and BFA from the School of the Art Institute of Chicago in 2009. She has been included in exhibitions at SPRING/BREAK, Los Angeles, 2019; Outback Arthouse, Los Angeles, 2018; Produce Model, Chicago, 2016; and Spears, Chicago, 2016. More about her at katherineharvath.com
DONATE
For more information please email: asantelli@thebillboardcreative.org