The Largest Gallery in Los Angeles
The Billboard Creative's goal is to help emerging and underrepresented artists break through traditional career bottlenecks by raising their profile in a massive way - as part of LA's annual billboard exhibition. 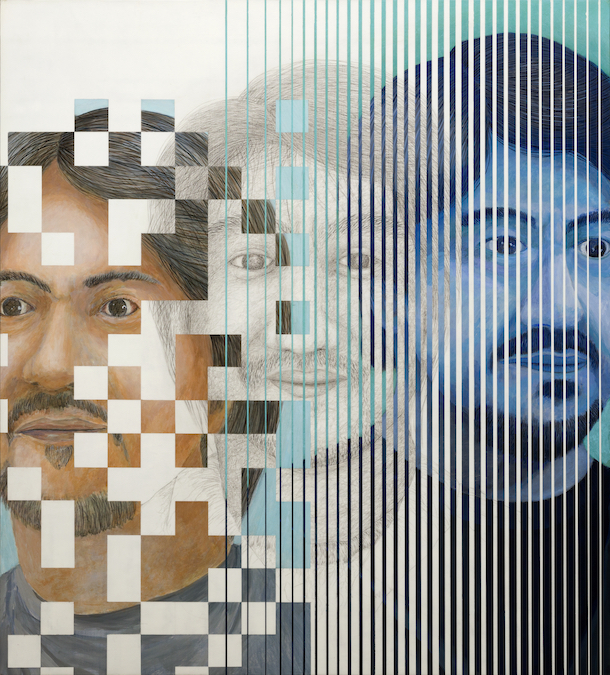 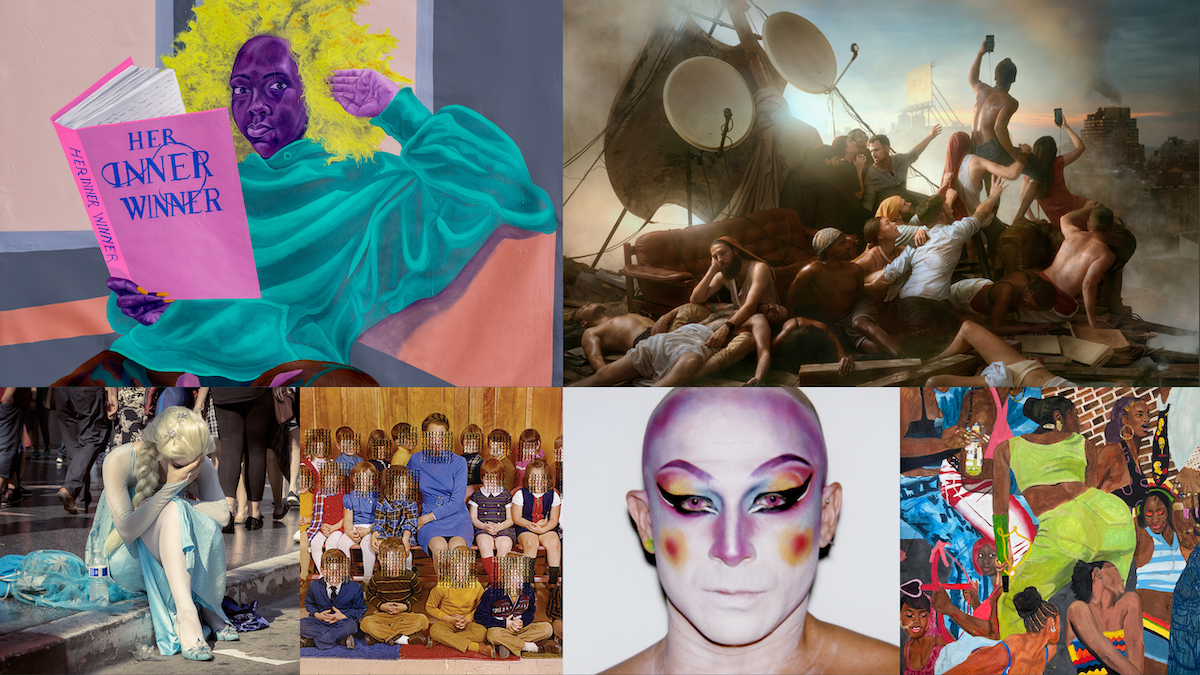 On February 6, 2023, The Billboard Creative (TBC) will host a billboard exhibition titled We The People featuring 30 works in a broad range of media - photography, painting, mixed media, collage, and sculpture by both emerging and established artists. Works are selected through a curated, blind submission process open to all and will be shown alongside guest artist Bryan Ida. LA: PAMP will feature the annual billboard exhibition throughout the duration of the exhibition.
More Info / Full artists list / Interactive map to all the locations / Interviews

"The Billboard Creative celebrates artists from all walks of life and creates a supportive platform for artists to share their work at the massive billboard scale with the city of Los Angeles." Mona Kuhn Curator

We sat down with two of the artist from the 2023 show. Guest Artist Bryan Ida and our youngest artist Emily Manwaring 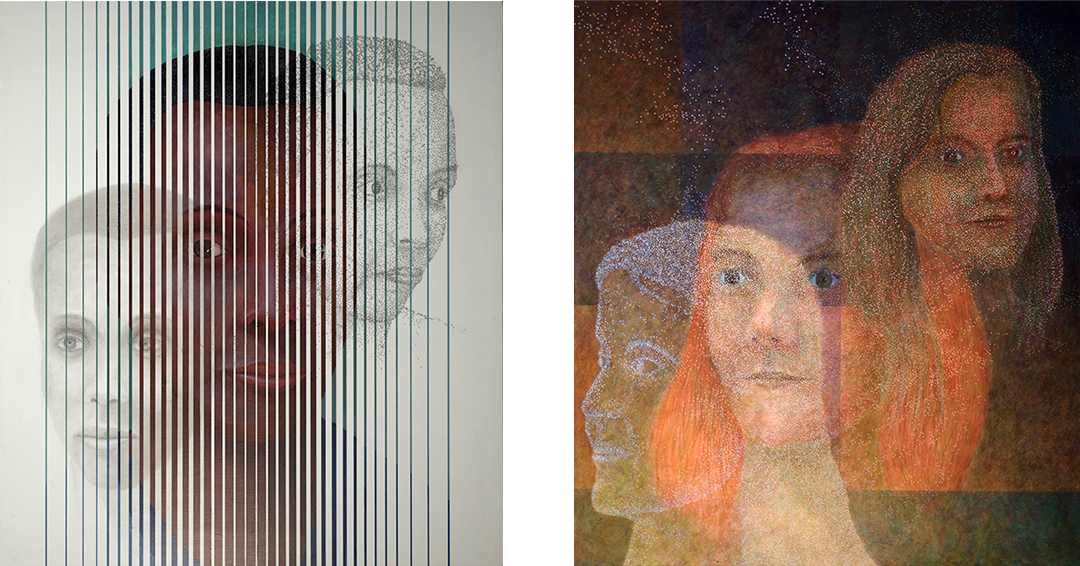 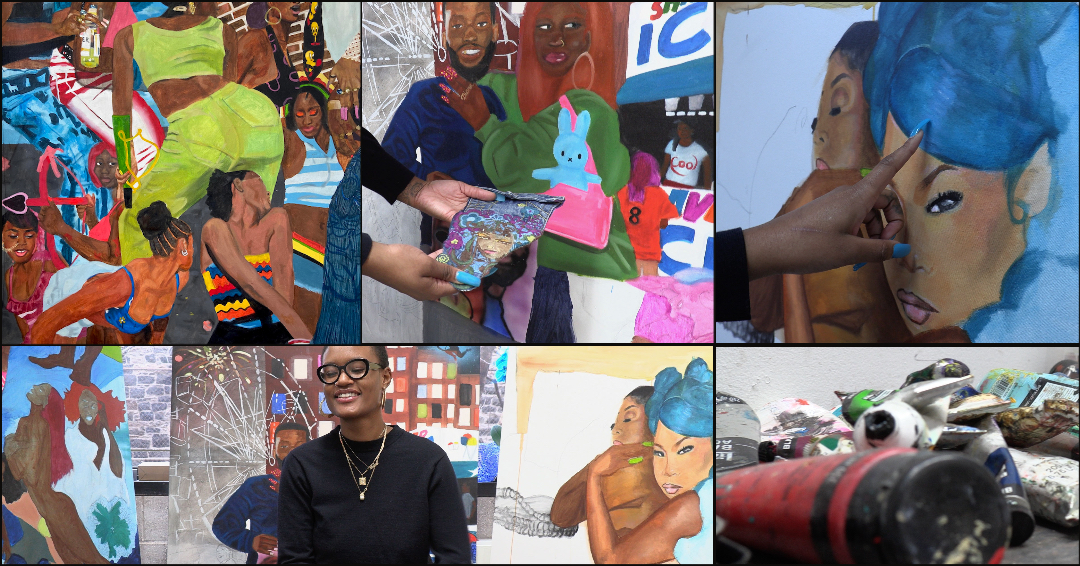 The Team at TBC did a studio visit with Brooklyn-based artist Emily Manwaring - one of the 2023 Billboard artists.
Interview 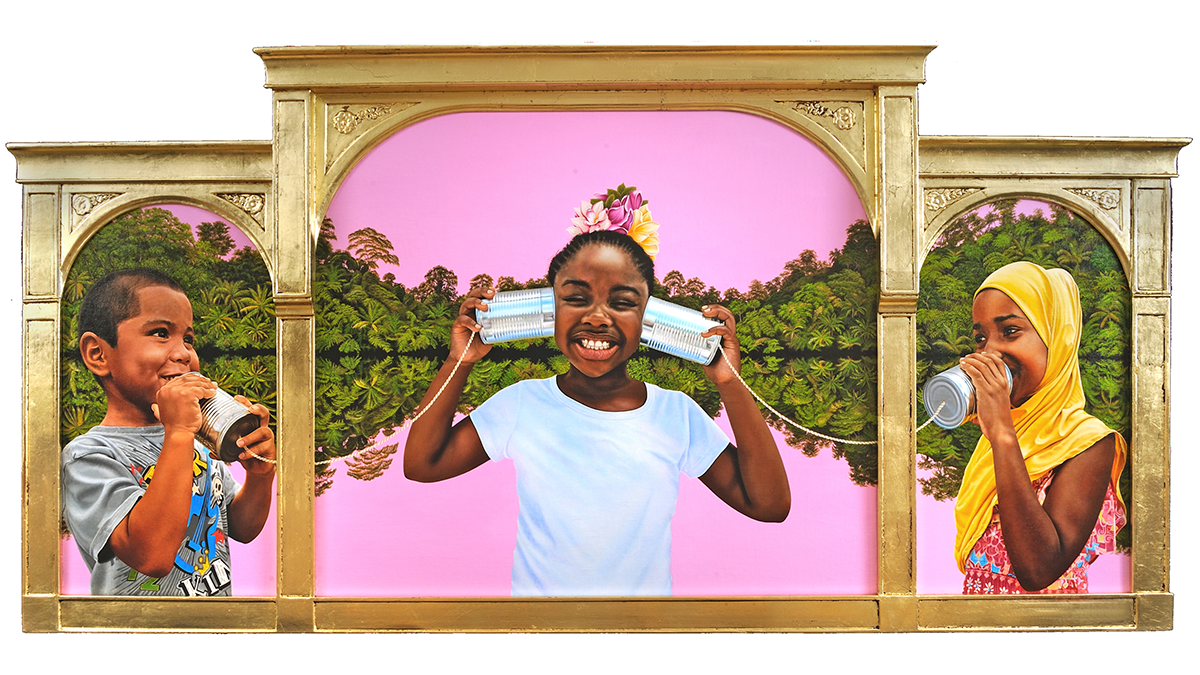 I show different perspectives on portraits of children from marginalized communities around the world...
More Info 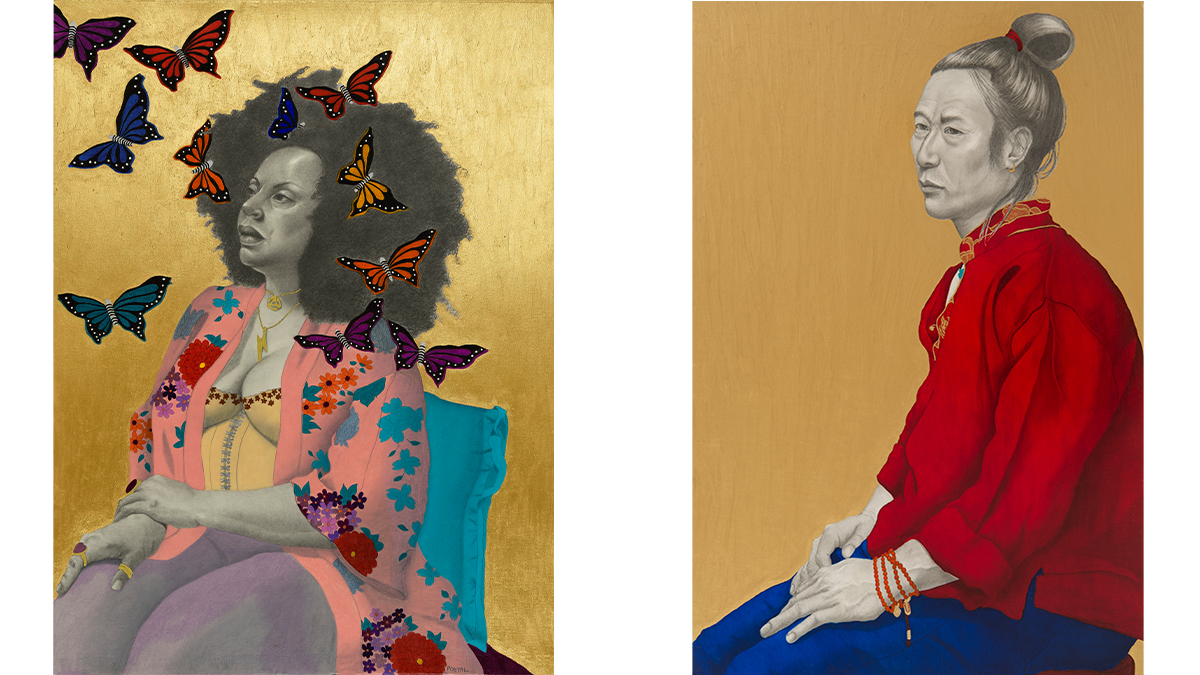 I always wanted to be an artist but we didn’t have too much money and I had to support myself.
More Info 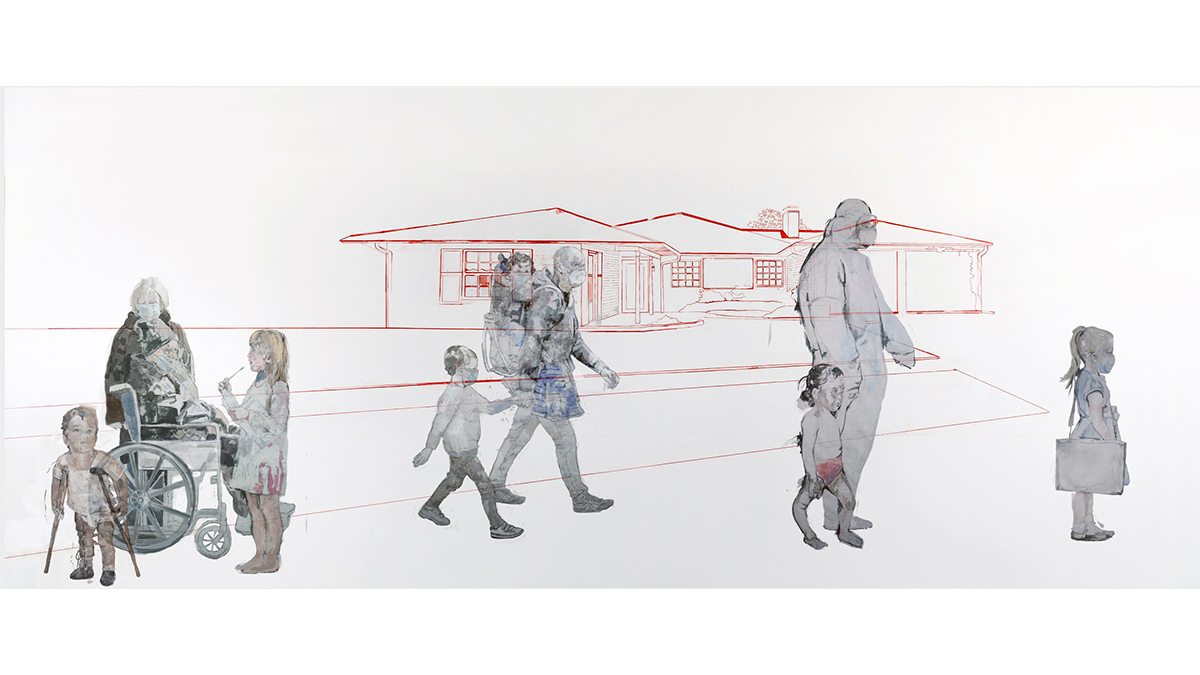 A new initiative to archive and promote public art throughout Los Angeles. The project will launch in February 2023 in conjunction with TBC’s ninth annual billboard exhibition.
More Info 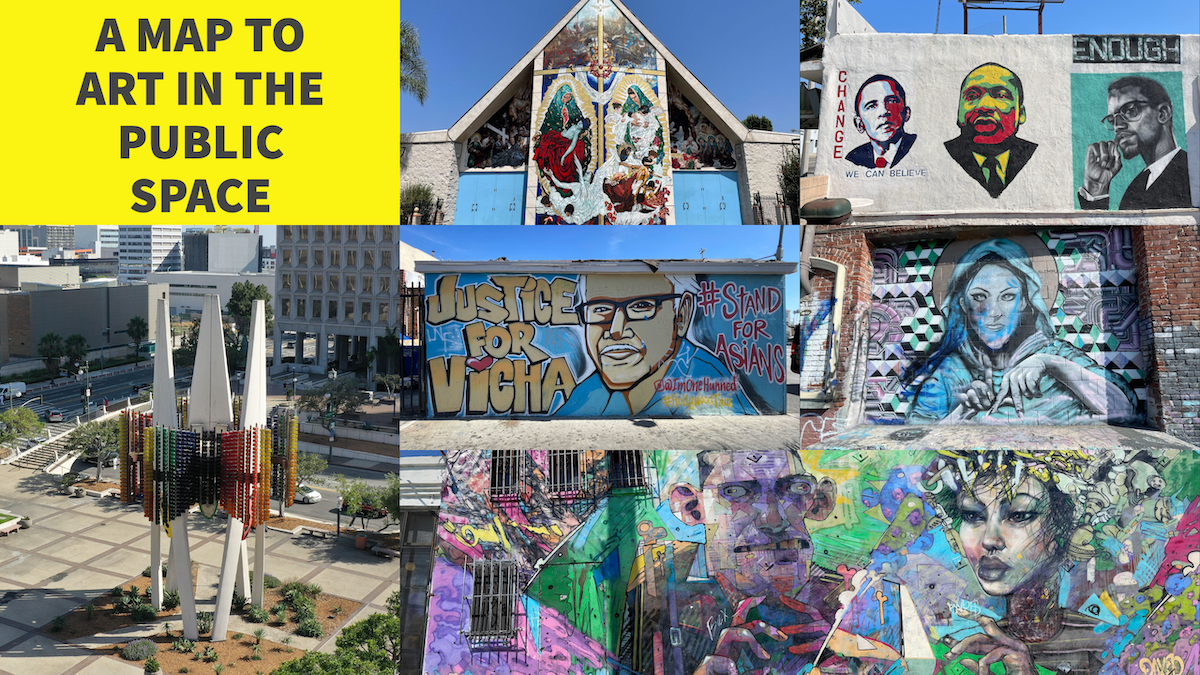 This Is Not A Gun

The project began in 2016 when Levine encountered a list of ubiquitous objects that were “mistaken” as guns by police officers in shootings of unarmed, majority-Black people: a sandwich, bible, hairbrush, wrench, and wallet to name a few. This Is Not a Gun engages with the public through community driven workshops hosted by artists, activists, healers, and mindfulness collaborators, and was developed into an eponymous book in 2020. 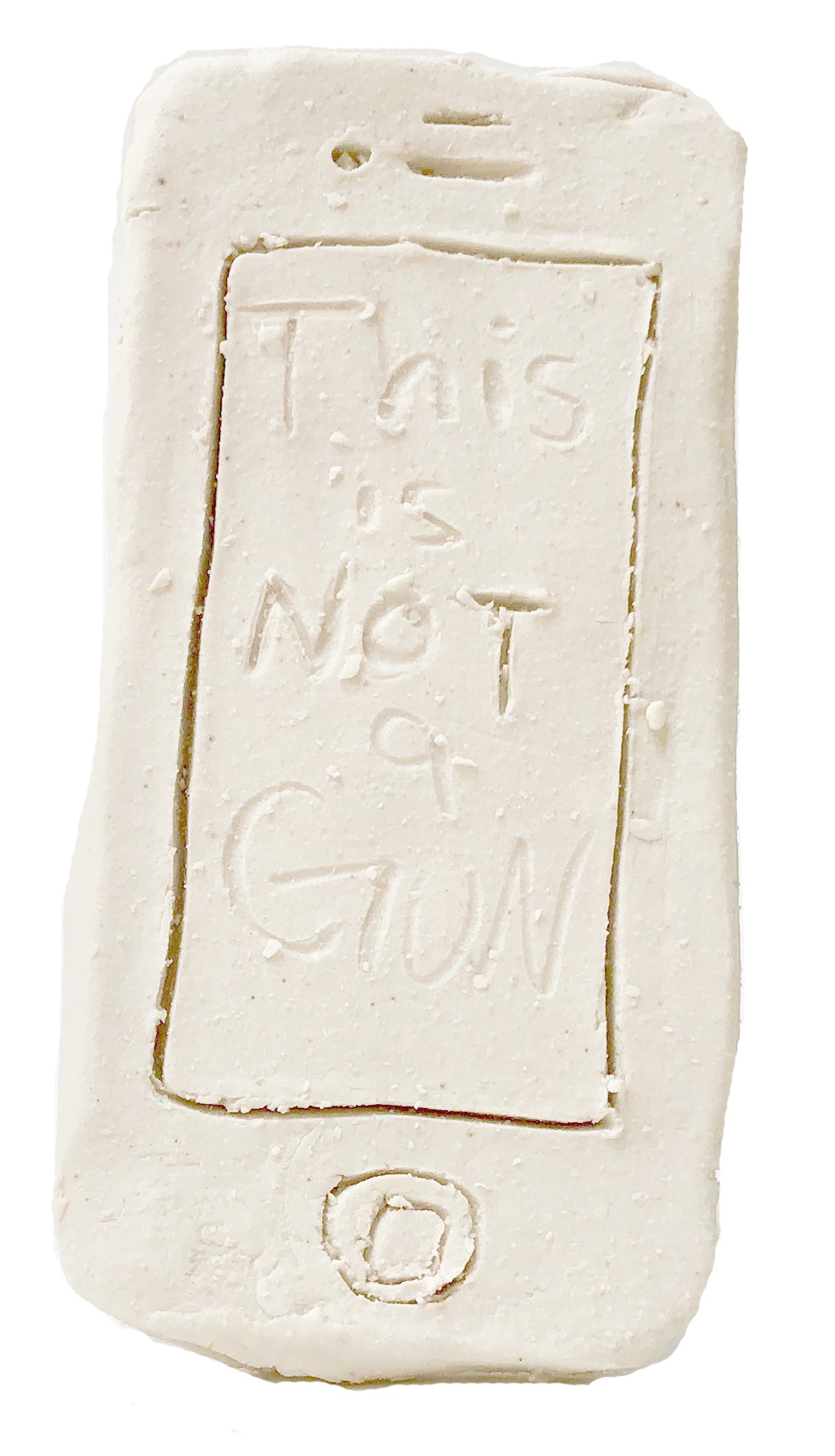 TBC|Interview takes a deep dive into the minds of today’s most vibrant and enigmatic creators worldwide. The series takes a uniquely intimate look at some of the most intriguing voices working outside of the mainstream spotlight.
More Interviews 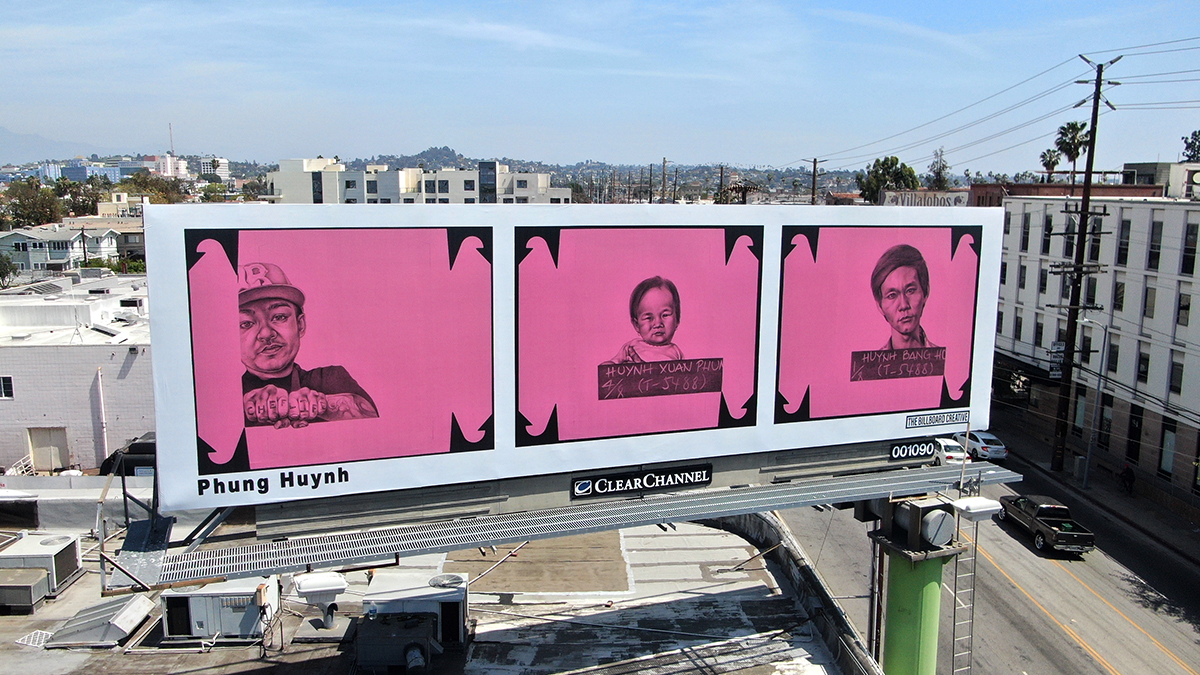 TBC produces an annual, month-long exhibition on the streets of Los Angeles. For over 7 years, we have carefully curated and hung work on a massive scale throughout the city, with our billboards being viewed more than 1.2 million times. Celebrating emerging and mid-career artists from around the globe, the show is open to submissions across all disciplines. Click here for more information and to learn how you can submit your work for consideration. 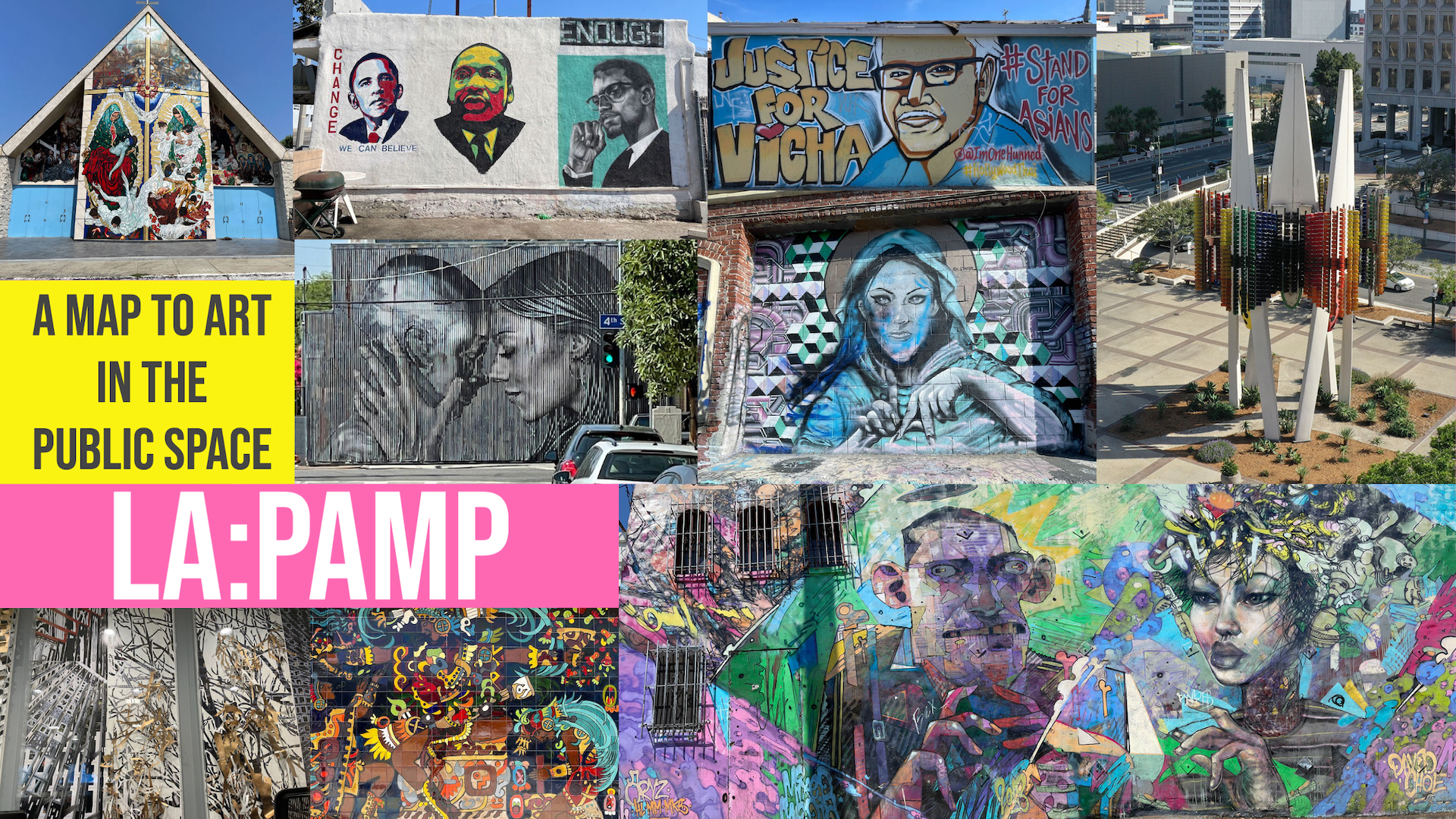 LA:PAMP is a smartphone and desktop map and archiving project. Built to help people find all things public art, murals, and graffiti in our community. It includes a section of historical and culturally important murals curated by @public_archivist and the Civic Art Baseline Inventory. There are also LA area galleries and museums. LA:PAMP is a crowd-sourced project relying on volunteers, artists, and galleries to track and tag work throughout the Los Angeles area.  The Billboard Creative maintains and manages the project, but at its core, it is a project created by the artists of our city and beyond. Their drive is to give our city its unique voice and visual aesthetic that can only be Los Angeles. 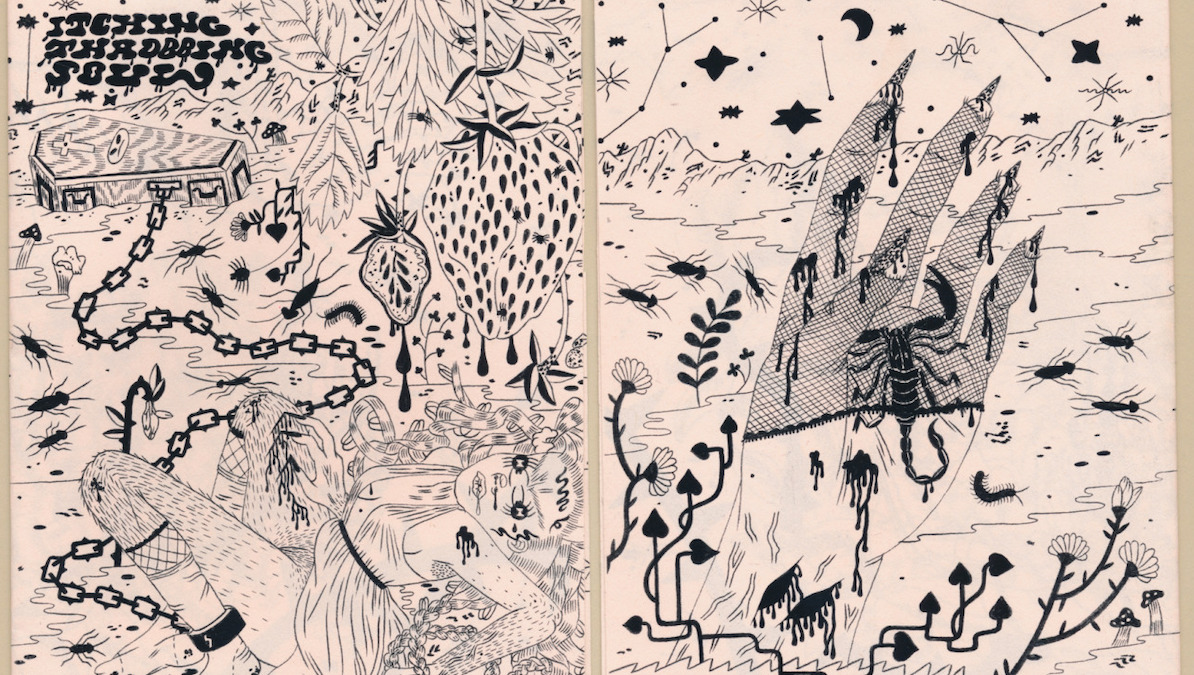 A digital look at today’s most interesting voices in art, from all sides of the creative spectrum. TBC Interview will be a growing resource for in-depth conversations on the issues that artists are dealing with and thinking about right now. We hope it serves as a point of discovery, as well as a place to delve deeper into the stories that drive each artist’s creative process.

Each of our exhibitions are headlined by one or more acclaimed guest artists. In addition to having their work featured on billboards throughout Los Angeles, these individuals help raise awareness and increase exposure for other TBC participants. Past guest artists have included Ed Ruscha, Lawrence Weiner, Marilyn Minter, Paul McCarthy, Alex Prager, Jack Pearson and Laurie Simmons. 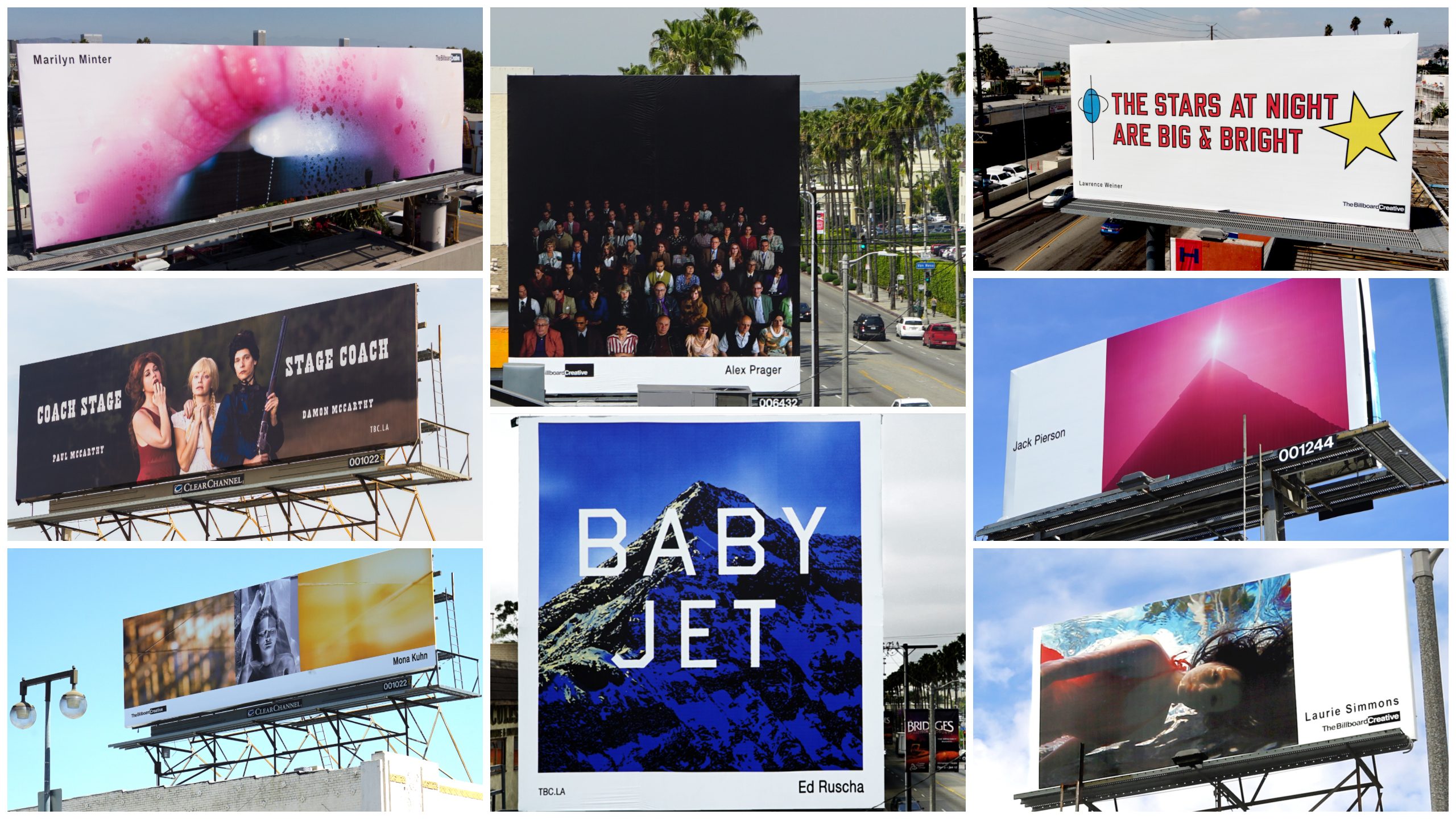 Blurring the Lines Between the Tangible and the Digital

Images From Last Show
Billboard exhibition featuring 30 NFT artists. The works were selected by Alejandro Cartagena from Obscura.io and Mona Kuhn from TBC. 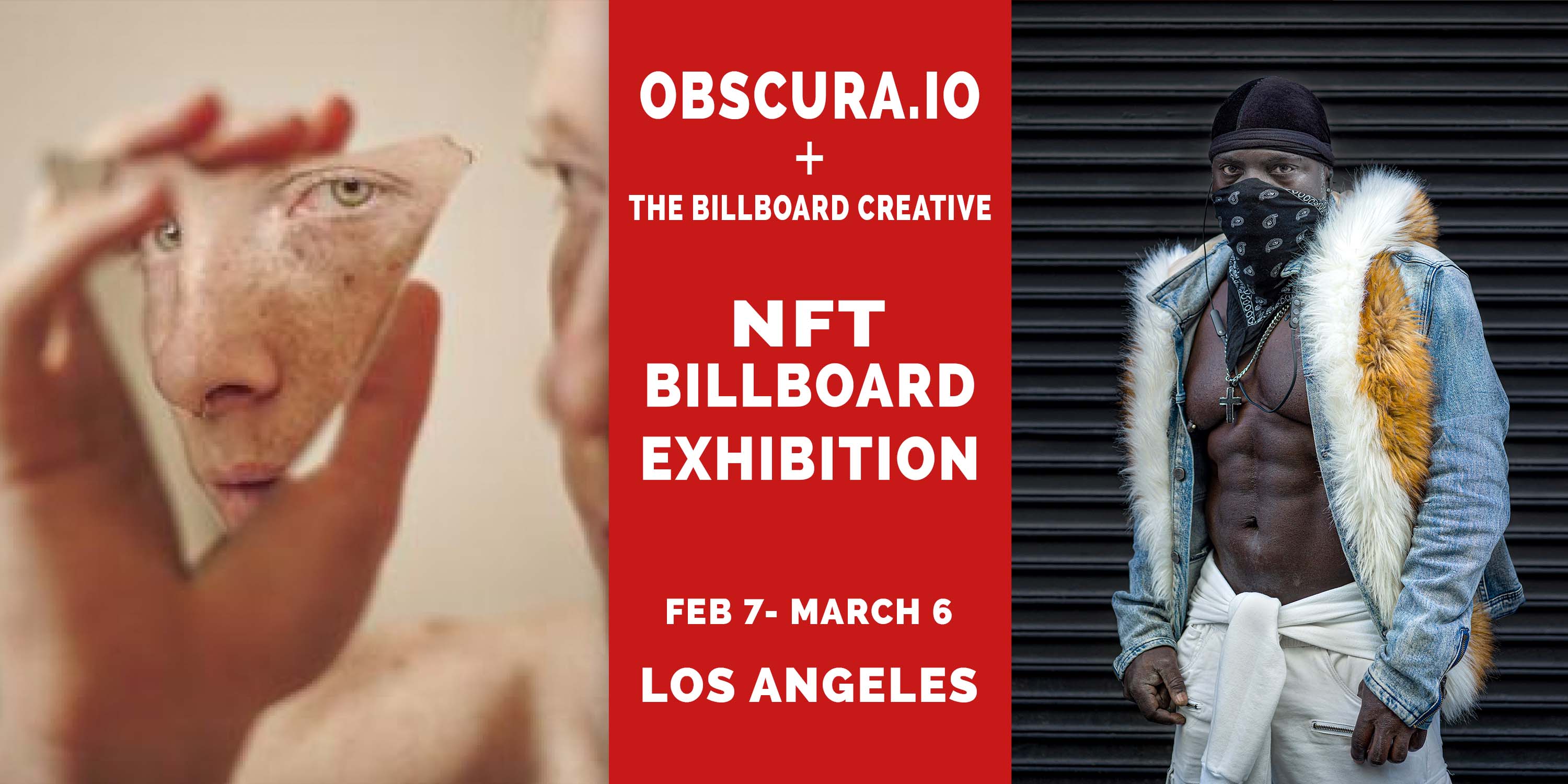 Co-Production with the Hammer Museum 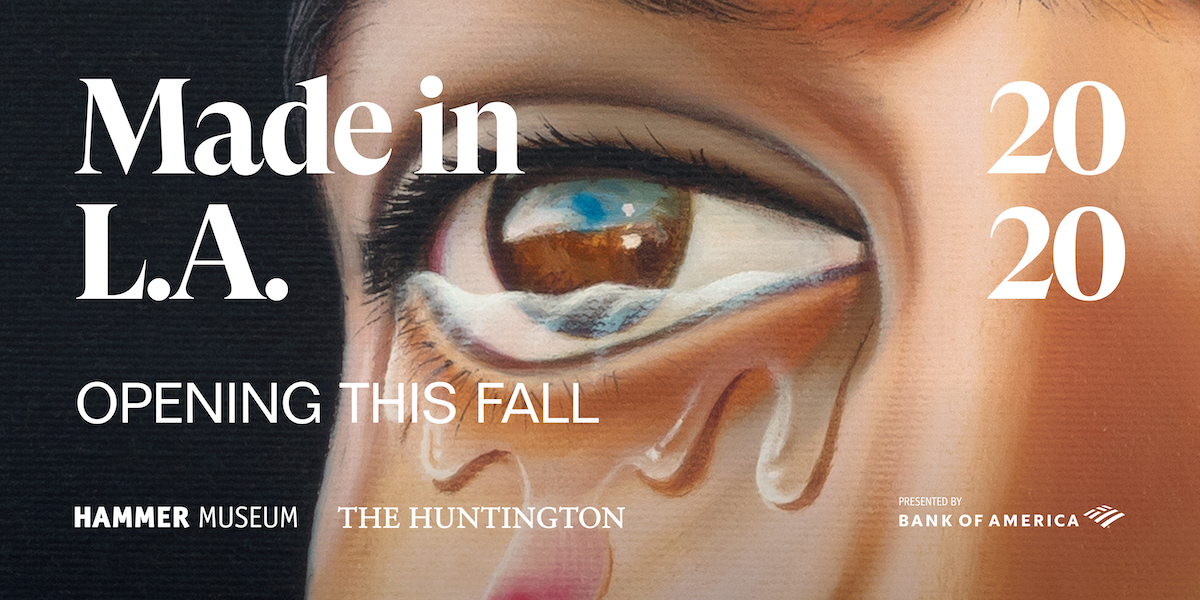 TBC is co-producing the billboard segment of Made in L.A. the Hammer Museum’s acclaimed biennial. Five site-specific billboards by artist Larry Johnson will be on display this fall. The exhibition will feature 30 artists with works installed at both the Hammer Museum and The Huntington Library, Art Museum, and Botanical Garden 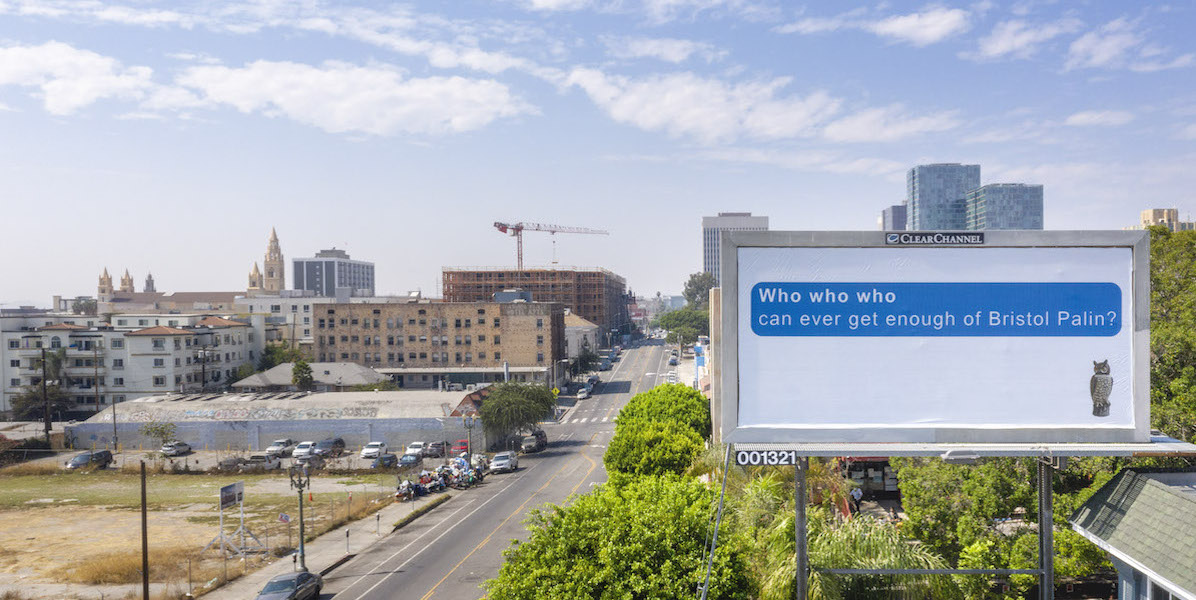 Interview with Made In L.A. Curators

A conversation with Made in L.A. : a version curators:
Myriam Ben Salah and Lauren Mackler 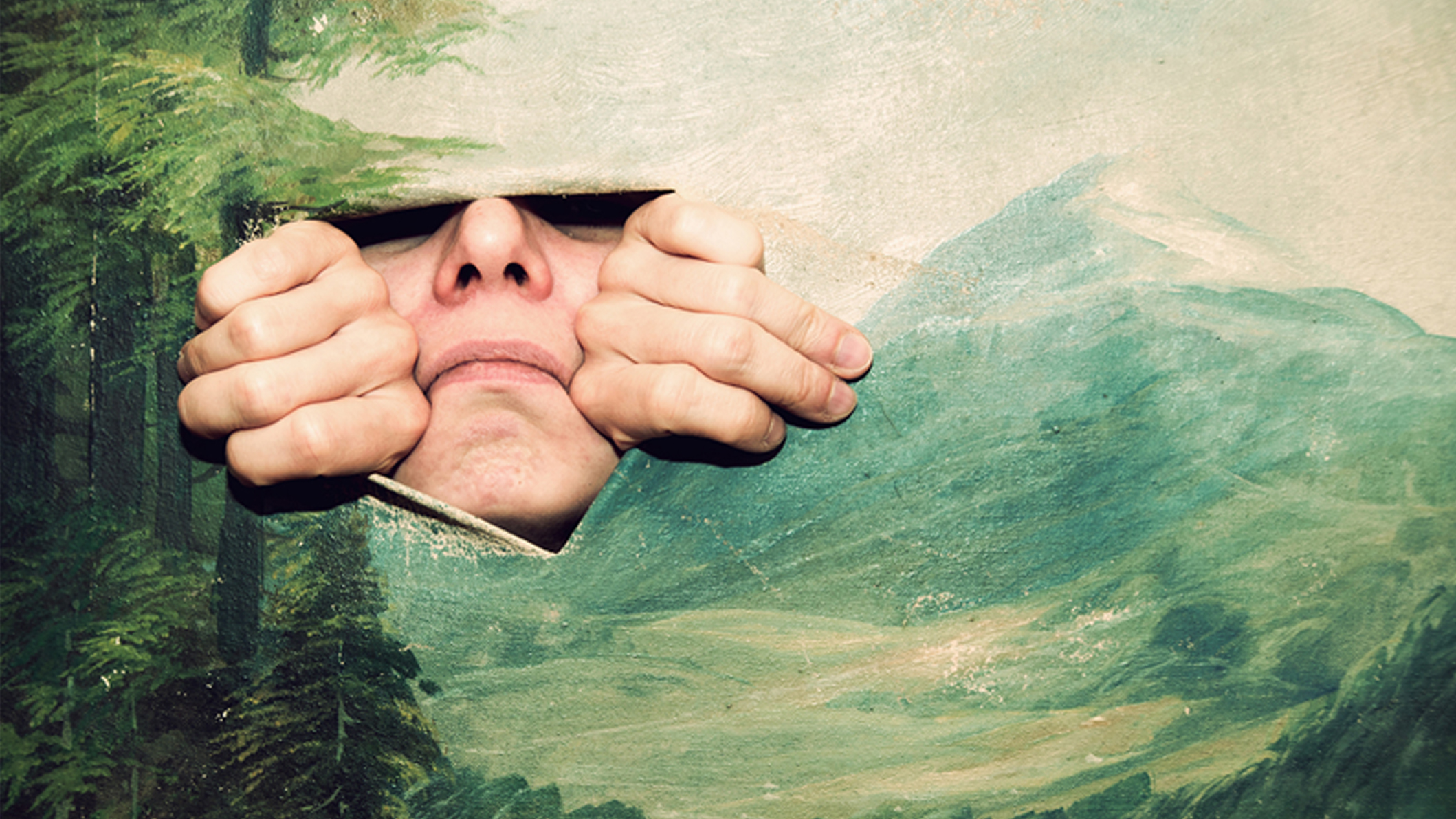 TBC began with a single billboard and has grown to an average of 40 billboards per show. That wouldn't be possible without the help of our generous donors. TBC consists of an all-volunteer staff, so your donations go directly to producing art shows and bringing attention to artists. We are a tax deductible 501c3.
Donate
DONATE
For more information please email: asantelli@thebillboardcreative.org