The Biggest Gallery in Los Angeles 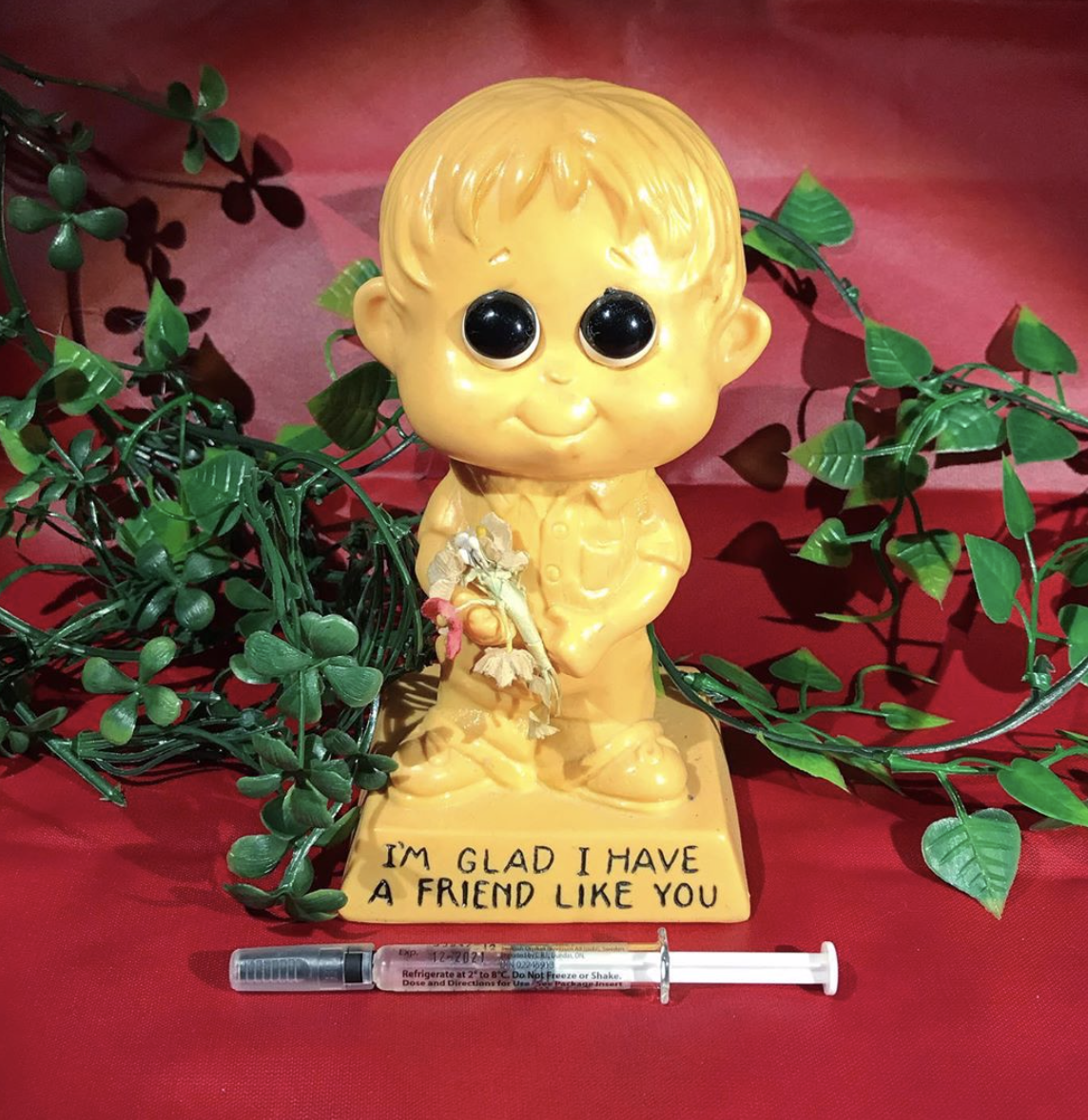 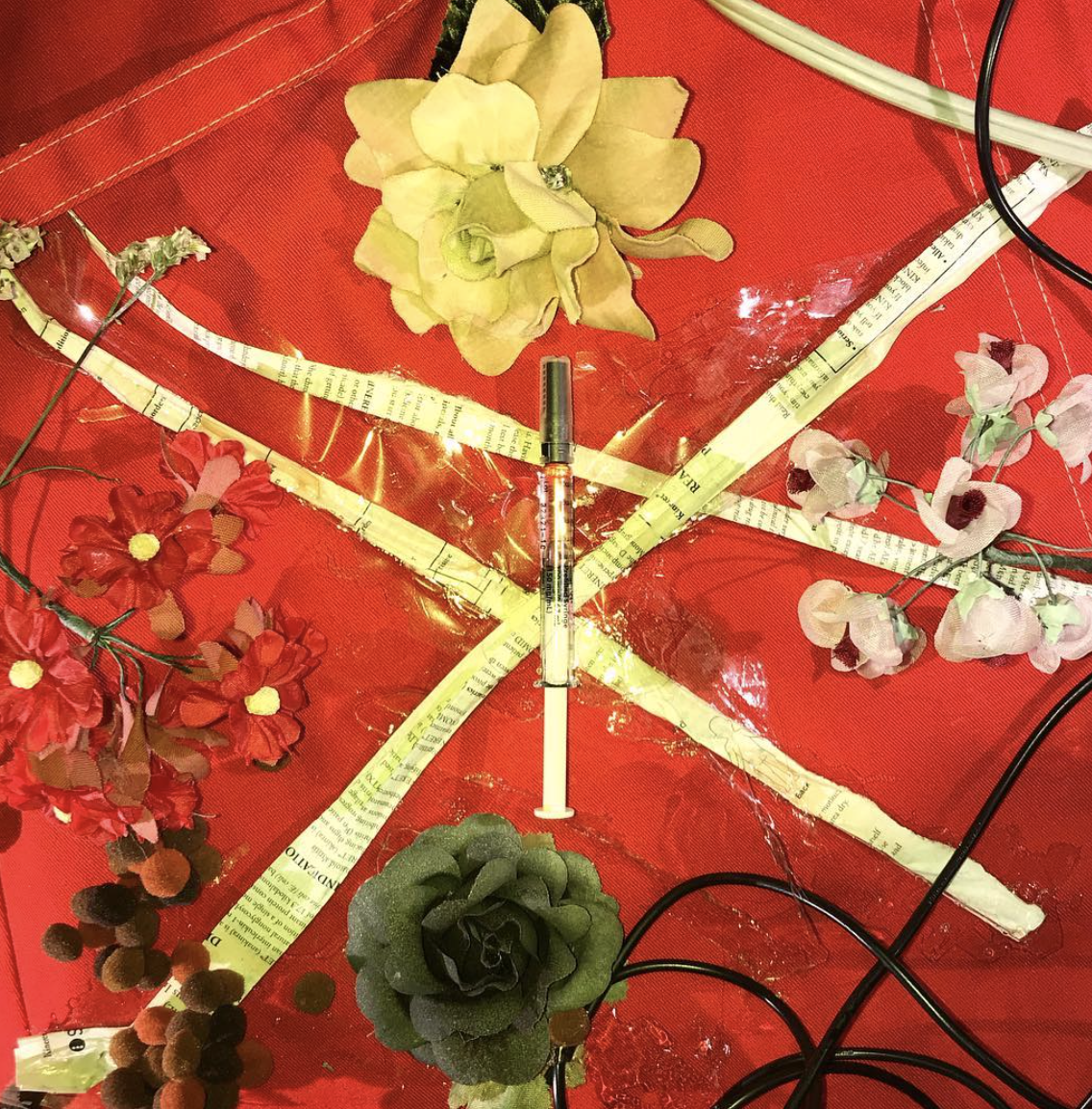 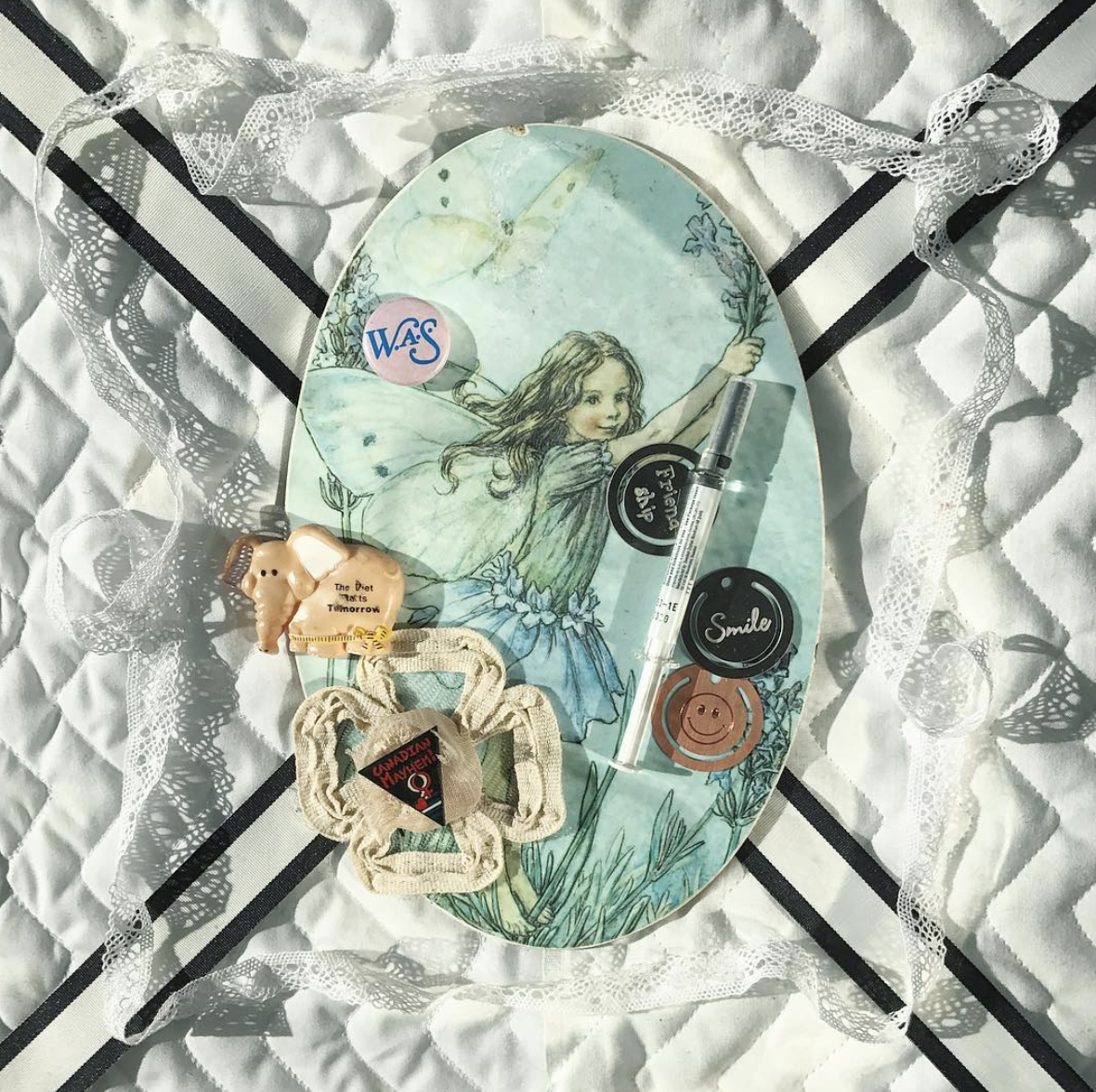 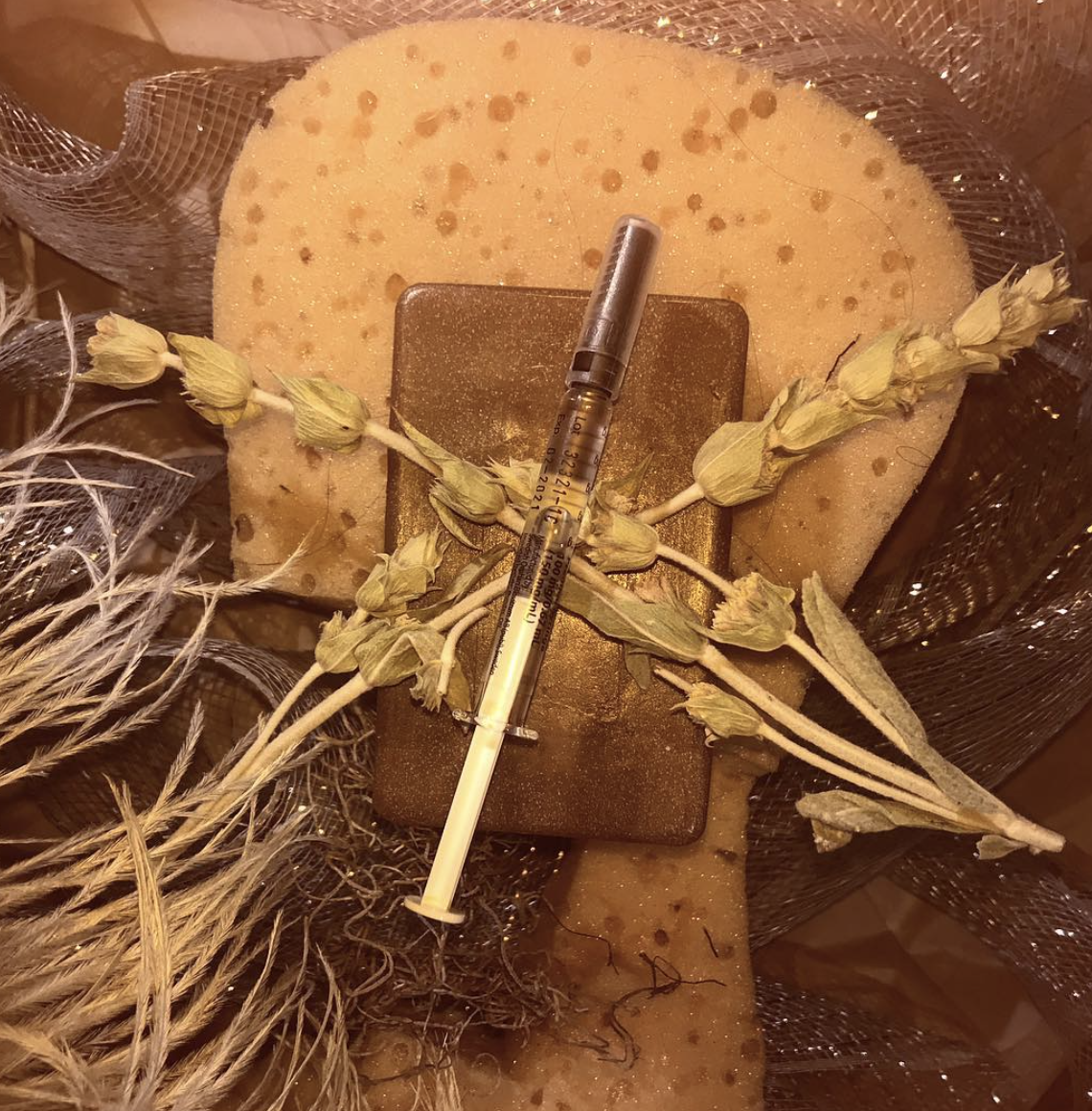 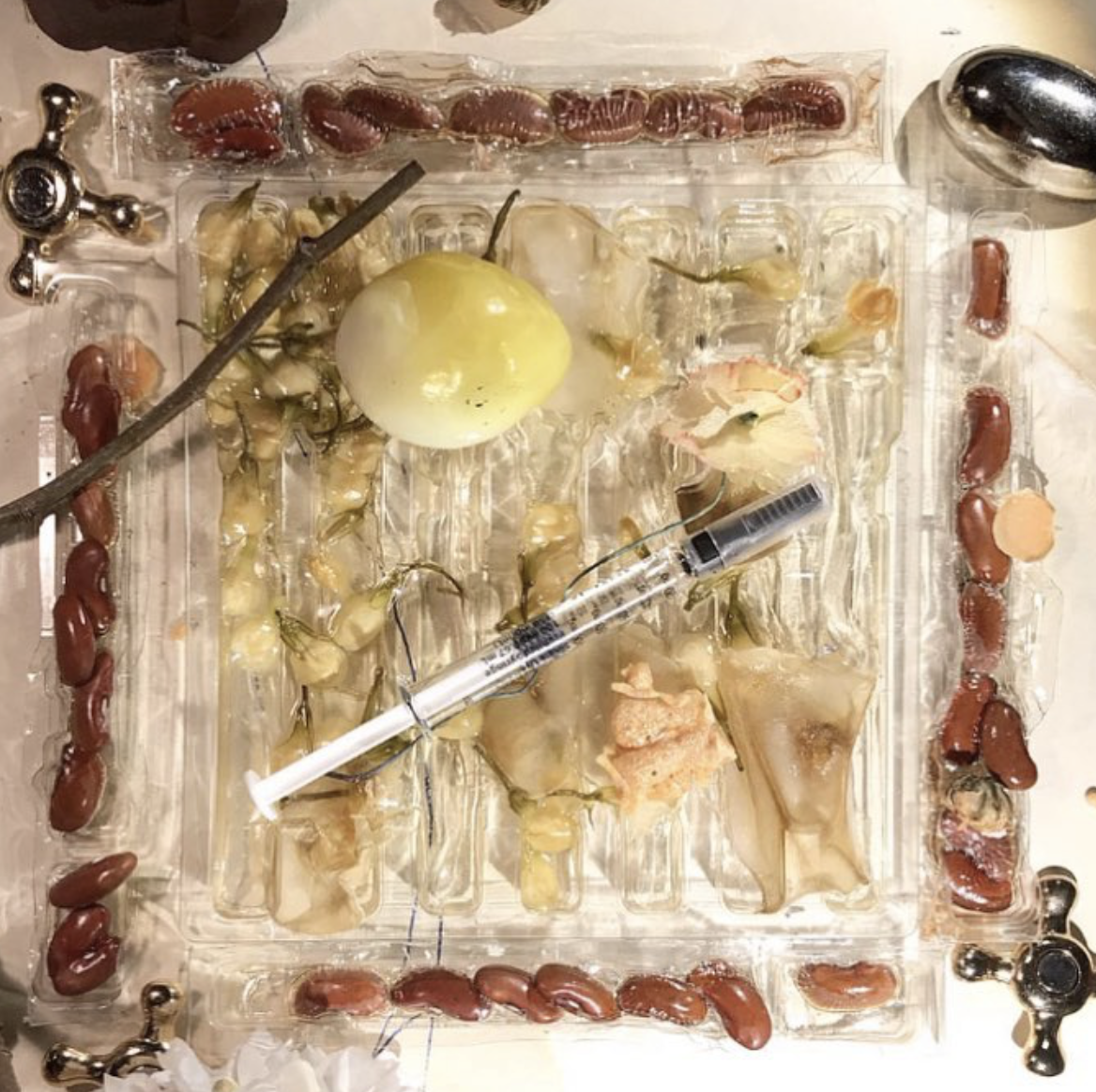 All of your work seems to stem from your lived experience as a chronically disabled person. Can you speak to the beginning of your journey as an artist?

It took me a really long time to publicly identify as disabled. In the late ‘90s, when I was diagnosed, disability was still divisive. I hadn’t seen representations that I identified with in pop culture. So, when I was young, I was very secretive about my experiences. Part of that was uncertainty of how people would react, and part was not fully accepting myself.  But I always made art sculptures, food art, album art, or rave posters...it was an escape. In the back of my mind, I wanted to be more vocal about my experiences, but it didn’t always feel safe to do so. It was only five years ago that I started to speak up, especially online. One-on-one with someone, you’re not sure how they are going to react or how it might impact a personal or work relationship. But with the internet, you’re able to connect with other disabled folks and it created a place where people who were interested could reach me.
There’s a motif of botanical & homeopathic elements in your work. What is your relationship with natural medicine alternatives?
‍
My relationship with alternative medicine started really young. Being put on heavy-duty medications, you wonder, “Am I going to survive this?” Is my illness actually worse than these medications? I started researching natural medicine through newsletters at health food stores or books I found at thrift shops. I was really hard on myself—I wanted to go off all my medications. And while they didn’t change my DNA, I did find that the natural remedies often helped. I started figuring out ways of biohacking my diet on a really limited income, because we lived in pretty extreme poverty, especially when I was a teenager. We lived out in the woods and in rural neighborhoods—dirt road type places toward the interior of British Columbia, Canada. There were rattlesnakes and cacti, but also more humid environments with mountains, waterfalls, ferns, and pine trees. So I was also trying to learn from my environment—things like using pine resin as a salve. 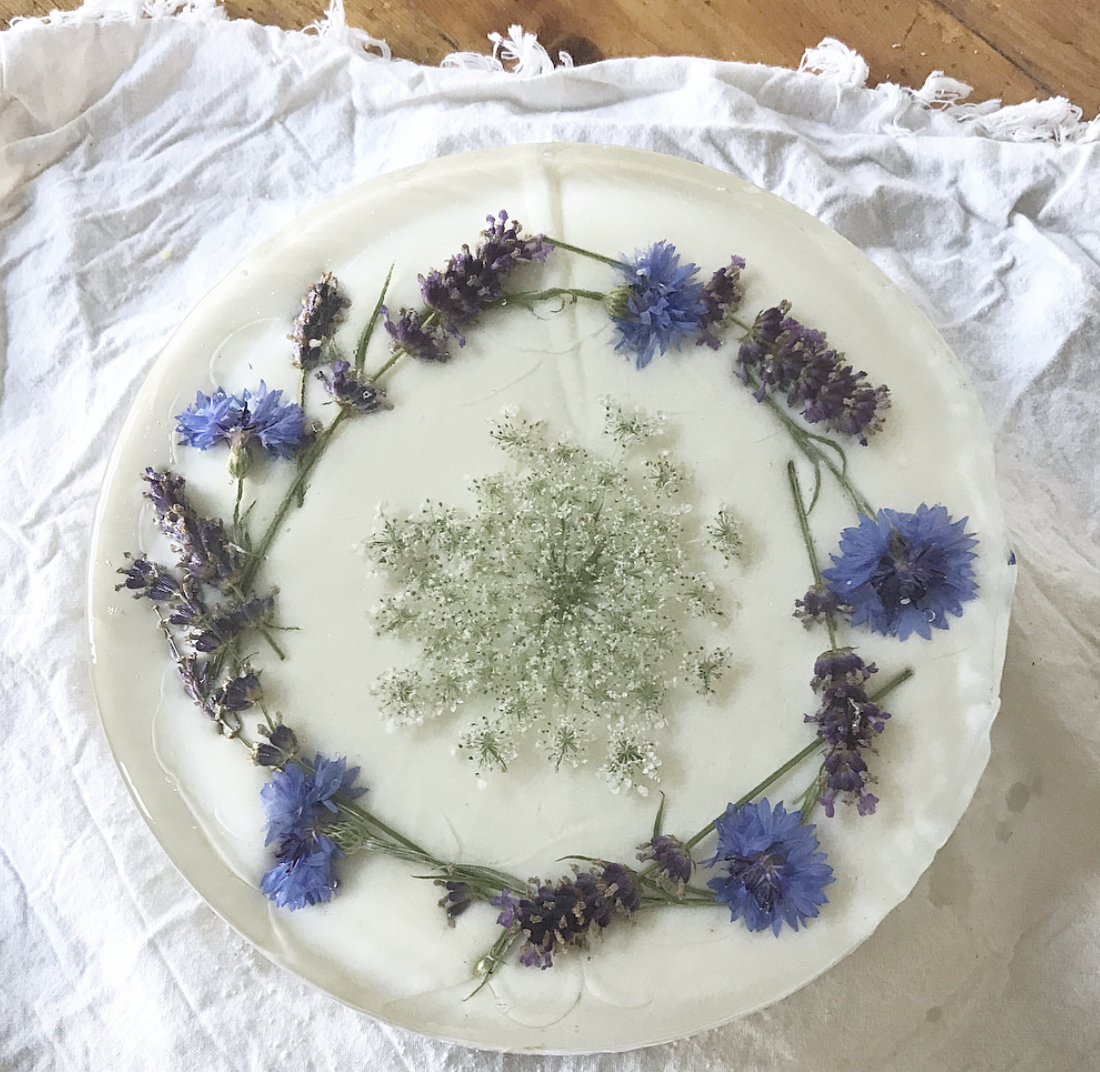 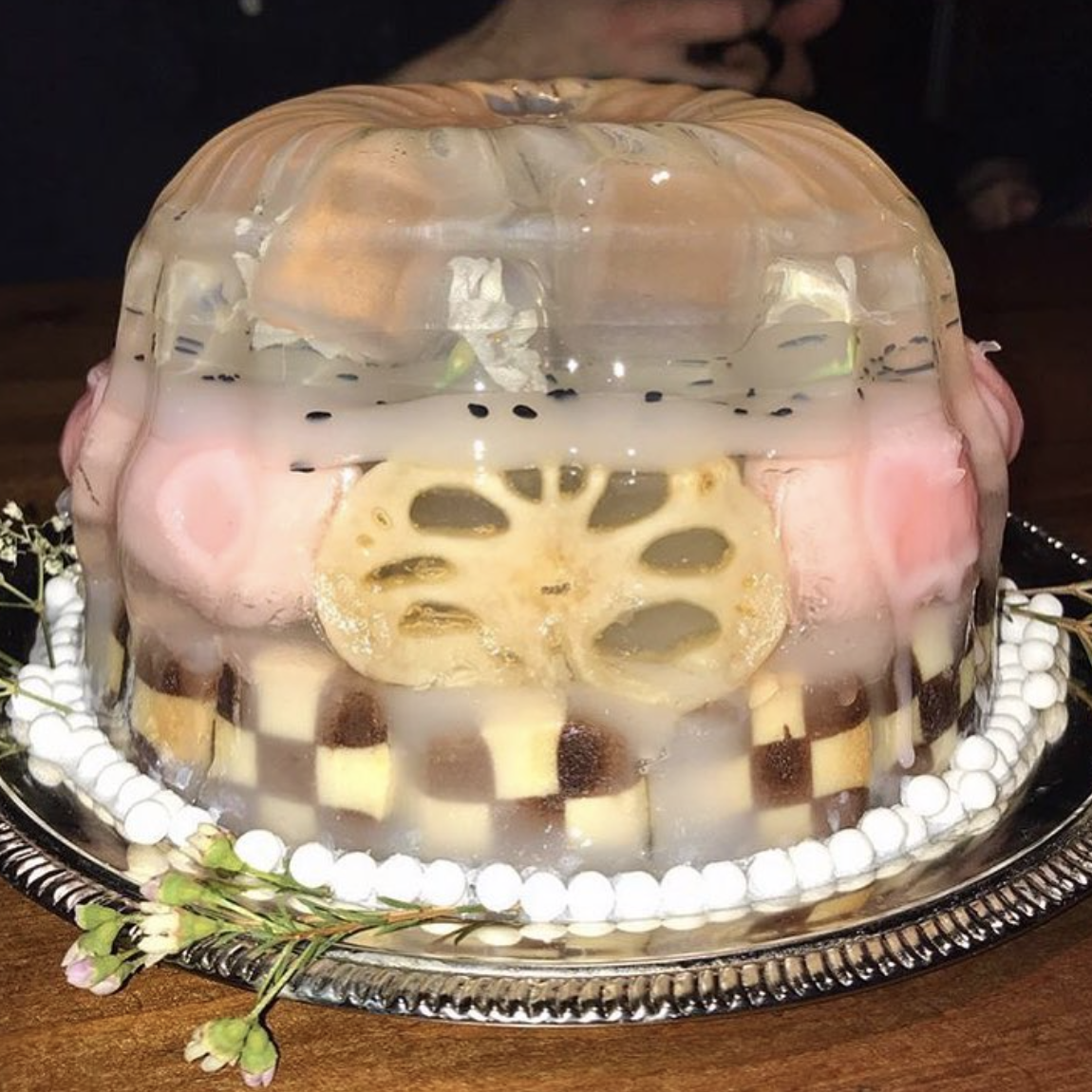 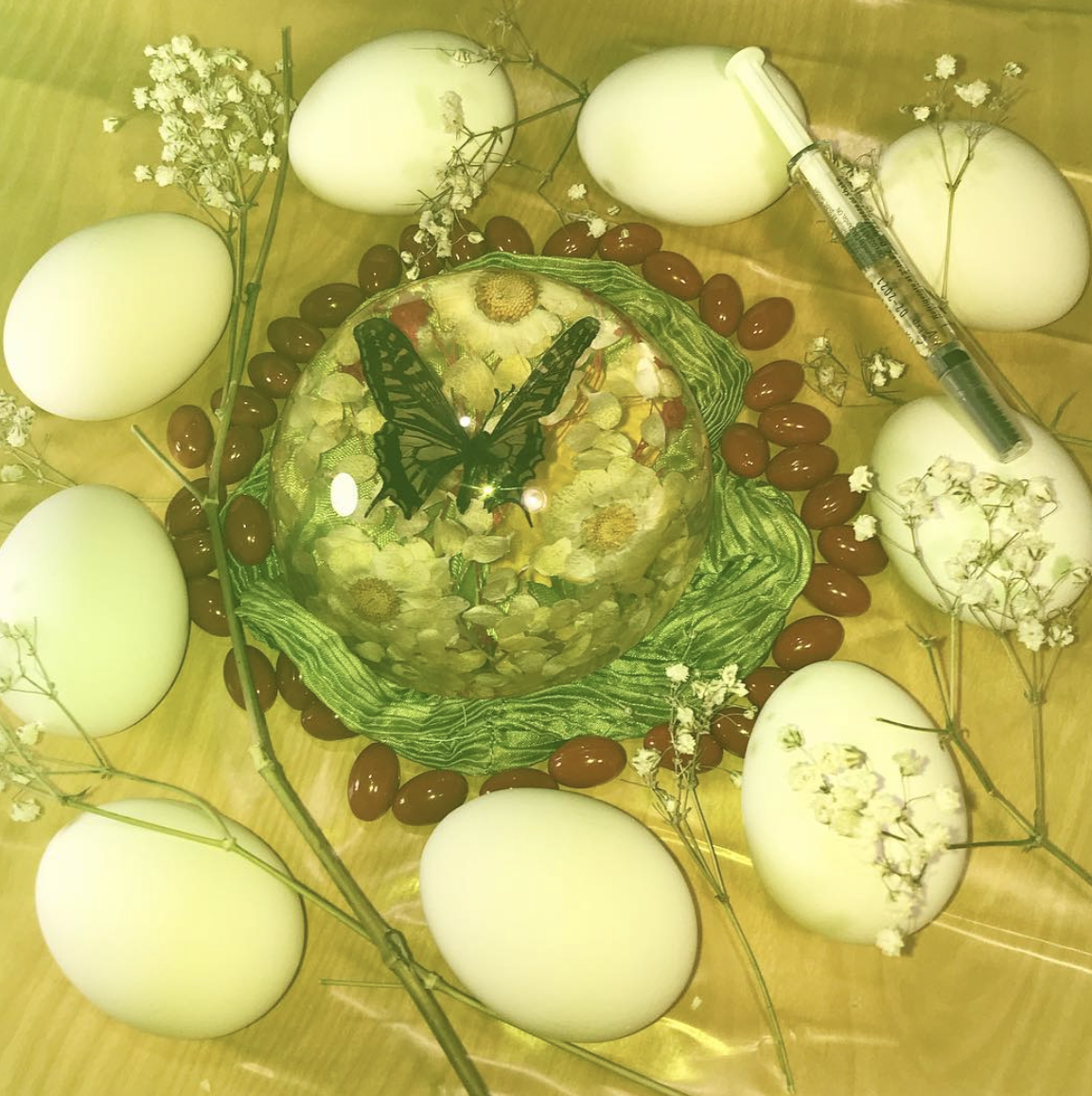 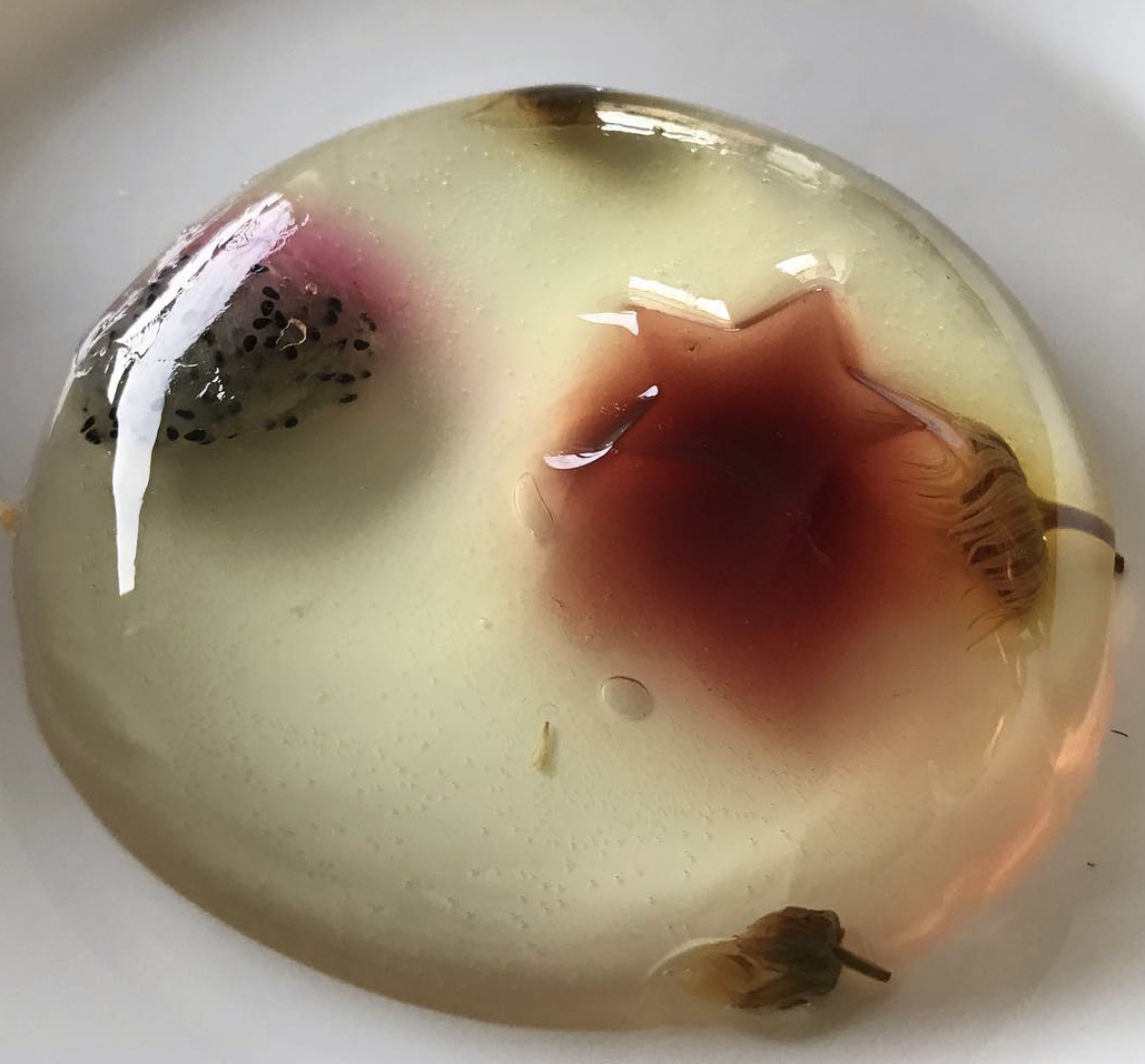 Your gelatin sculptures often contain beautiful flowers and herbal elements, which are sometimes juxtaposed with the sterile imagery of syringes and other western medical symbols. How do you view that contrast in your life?

For me, one of the challenges is figuring out where I sit in the spectrum of toxins, technology, eco-toxins, and natural treatments. A lot of western doctors aren’t that interested in traditional, eastern or Indigenous medicine, but the combination can be really powerful and it’s how we need to evolve. When you have a rare illness, you’re kind of left to figure it out yourself. One of the things I use most often—medicinally and in my art—is gelatin. My other go-tos are chrysanthemum tea, dandelion tea, and nettle tea. As far as that contrast, I’m really into experimenting and the general uncertainty of our experiences. Even when I write, my style changes. I’ll use more clinical words mixed with qualitative words. Having been medicalized as a body, when I’ve always wanted to be completely natural, I like [working with] the combination [of influences]. Even if we think we’re choosing not to ingest chemicals, we are, and I think that normalizing that is important. Syringes, in particular, divide people because they inherently have this kind of negative connotation. But I’ve been taking injection medications for over two decades. As a kid, it can make you feel like an alien, especially because those treatments are often kept in the fridge since they contain live antibodies. They’re hidden away, unlike pills, which we carry around in visible bottles. In my early teens, people were really suspicious of my medications, asking “What is that anyway? Are you getting high?” I just want them to be a normal part of living. 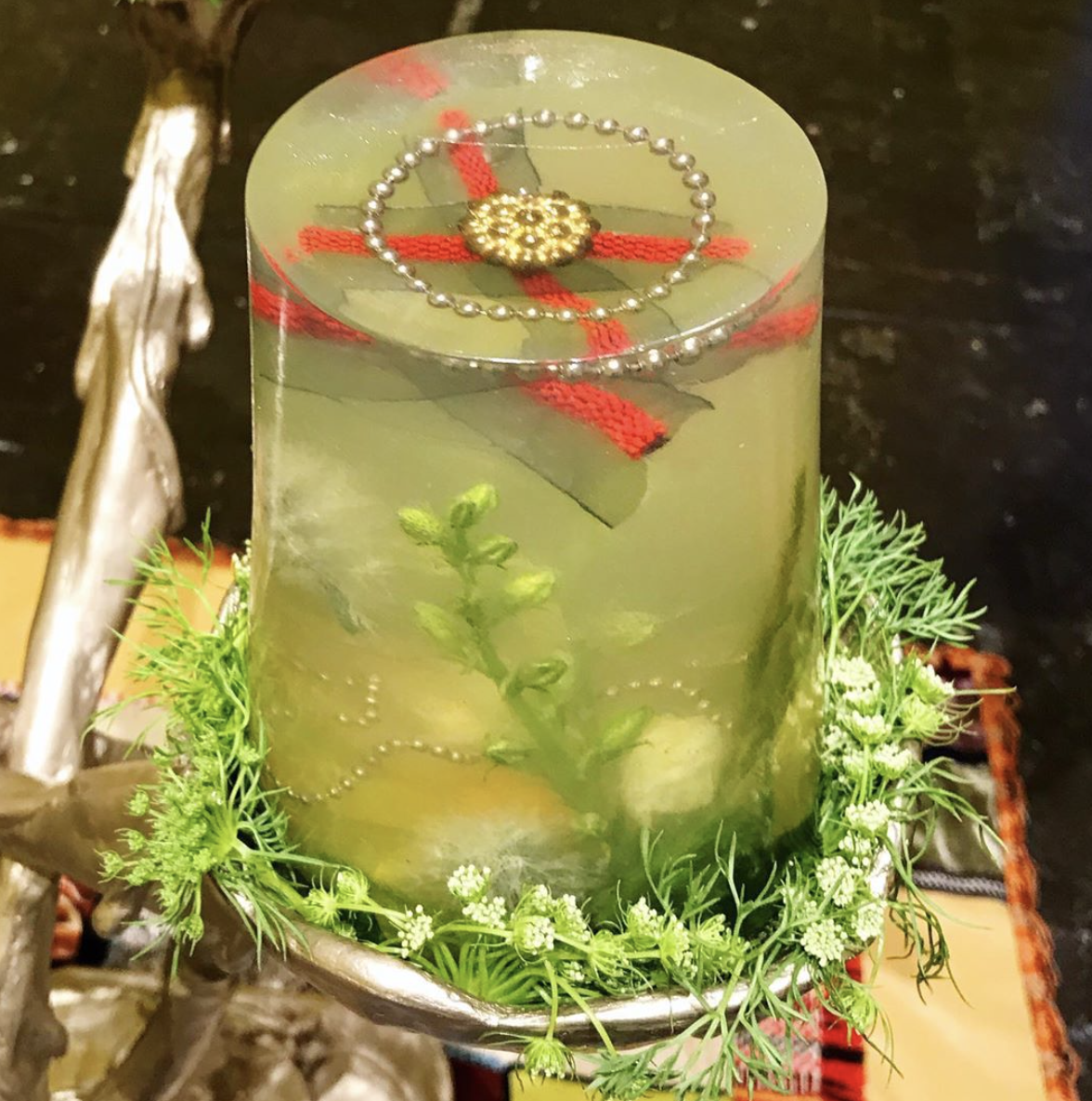 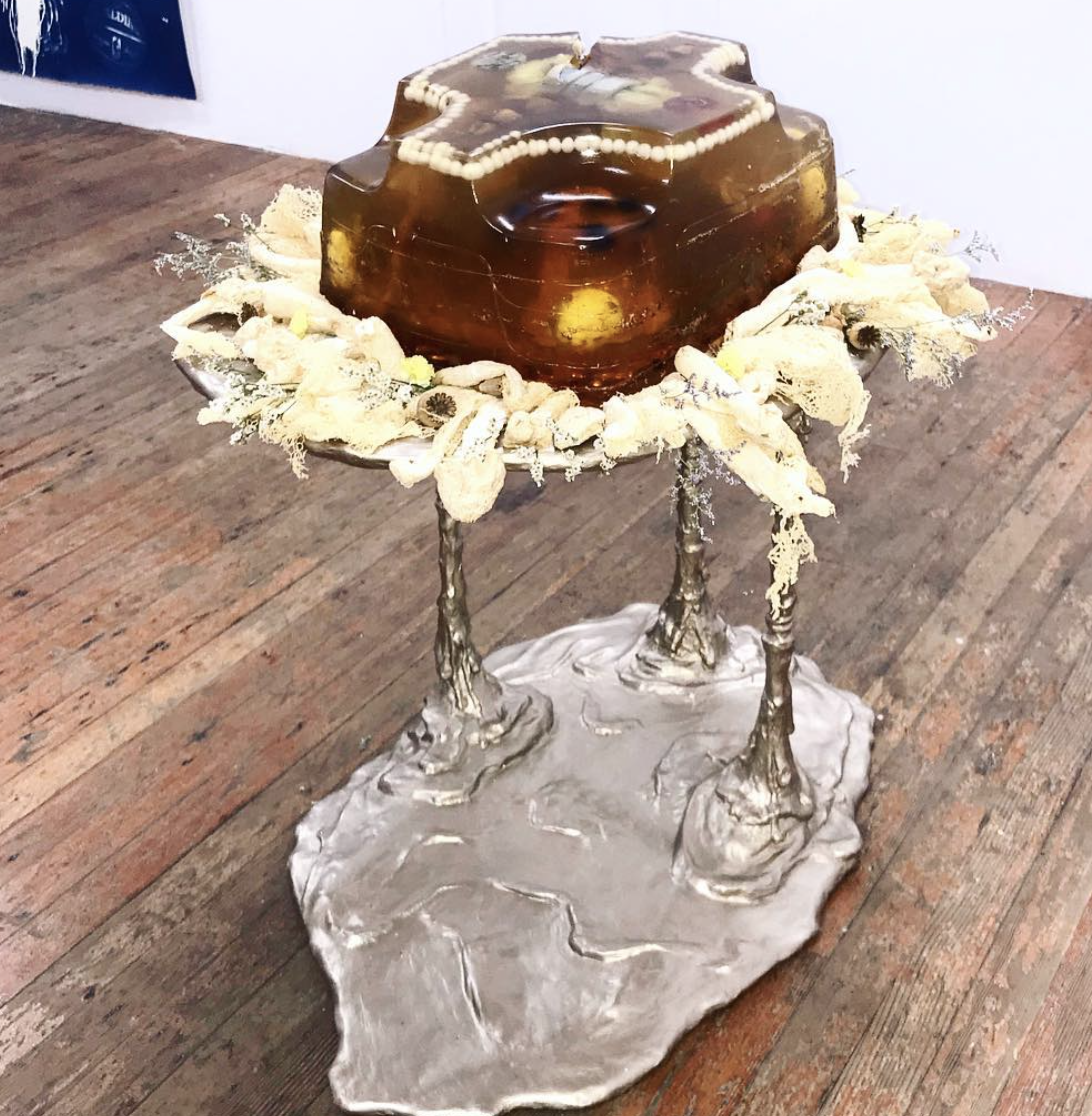 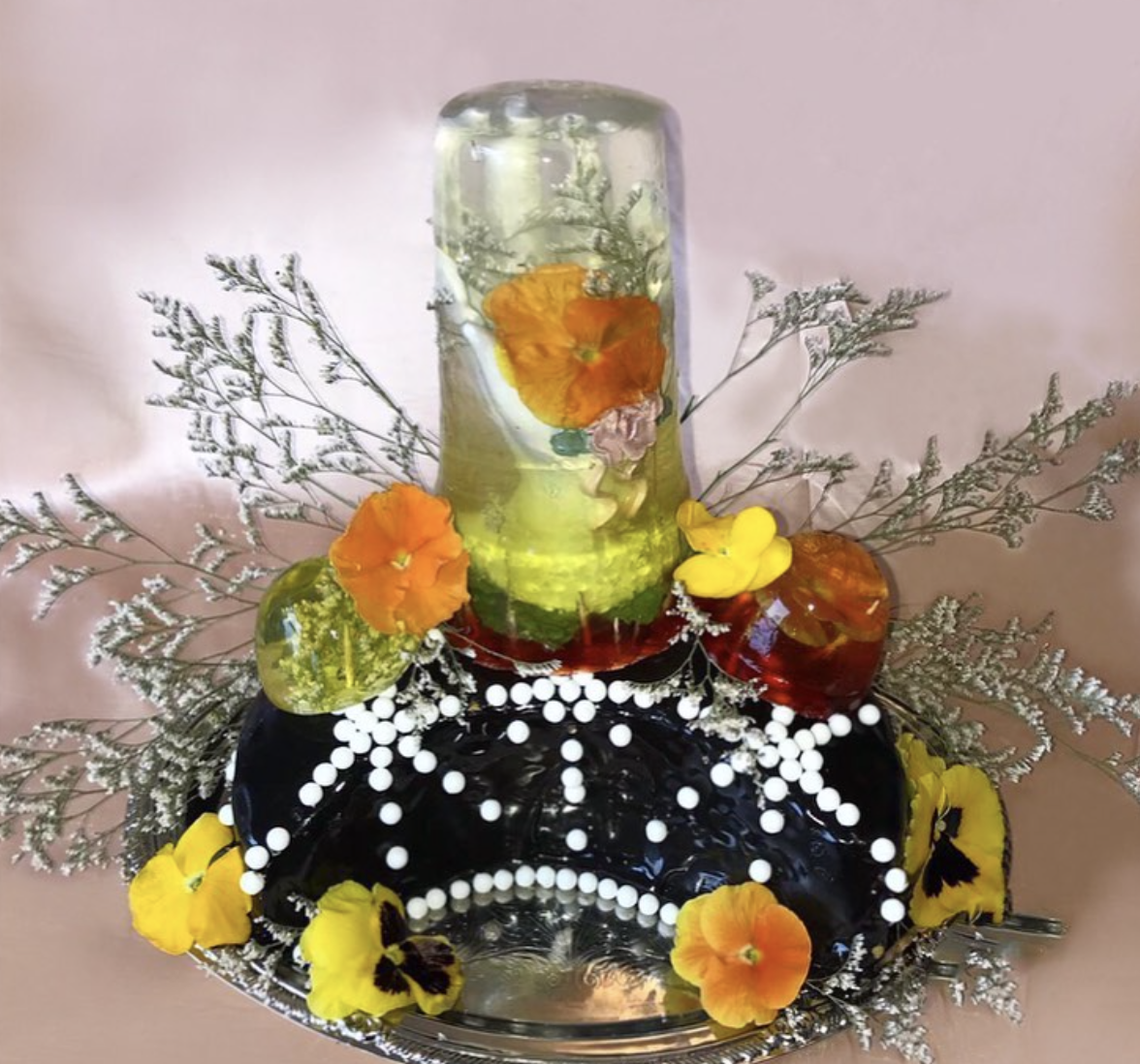 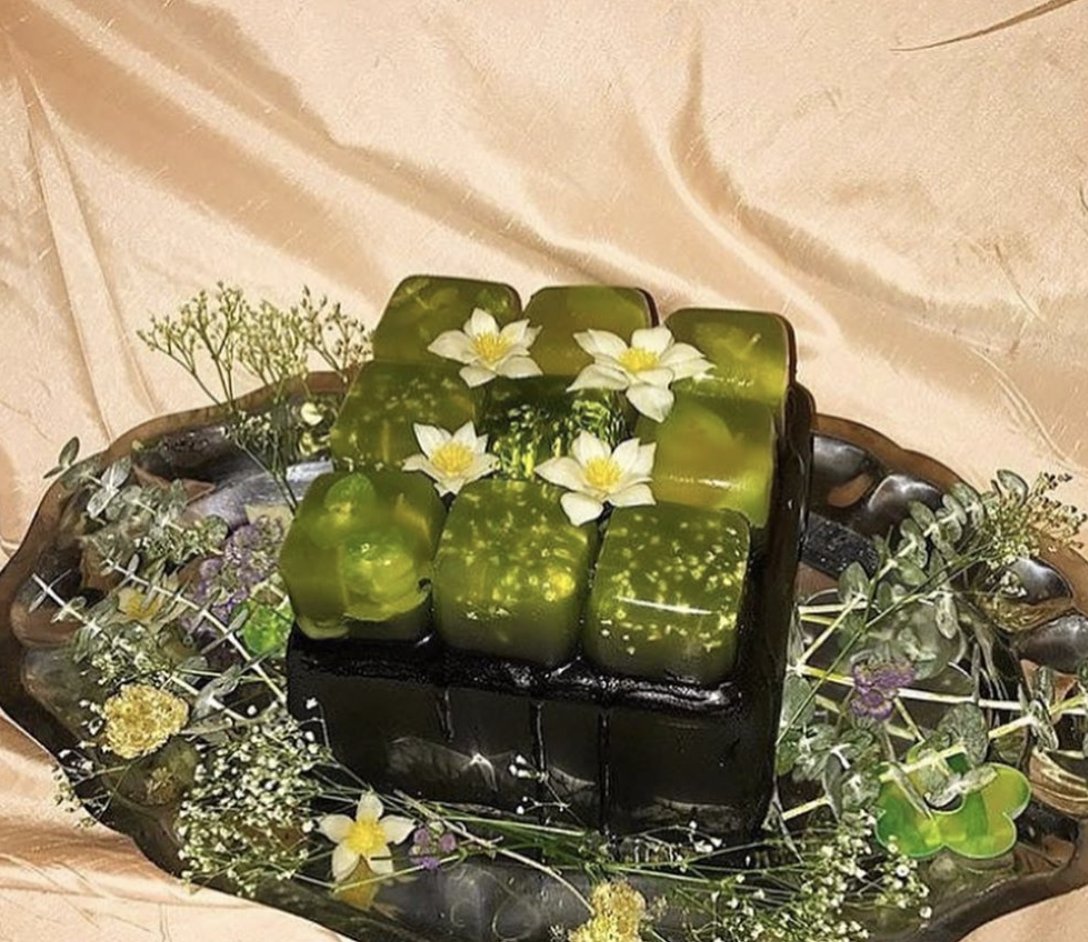 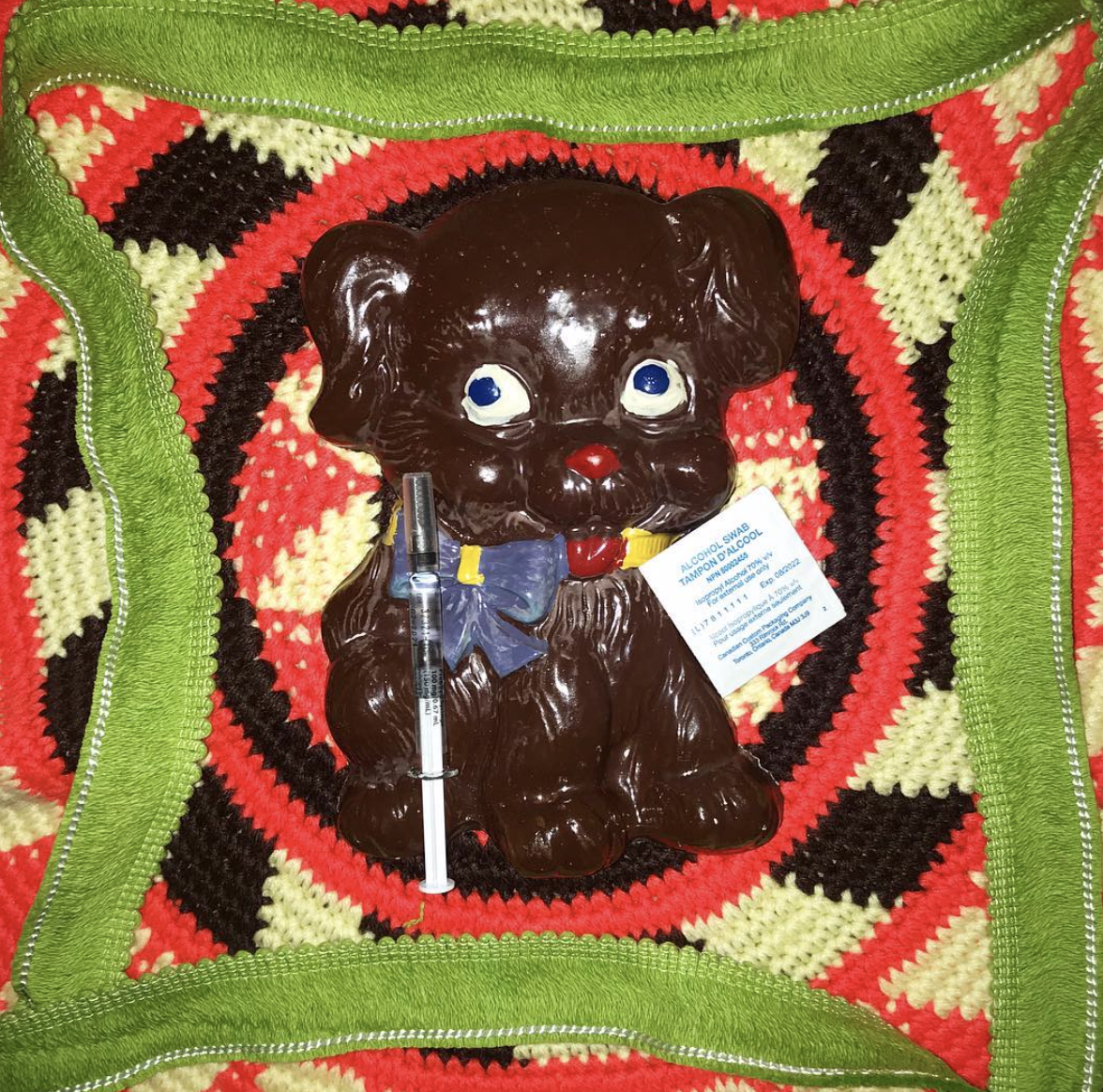 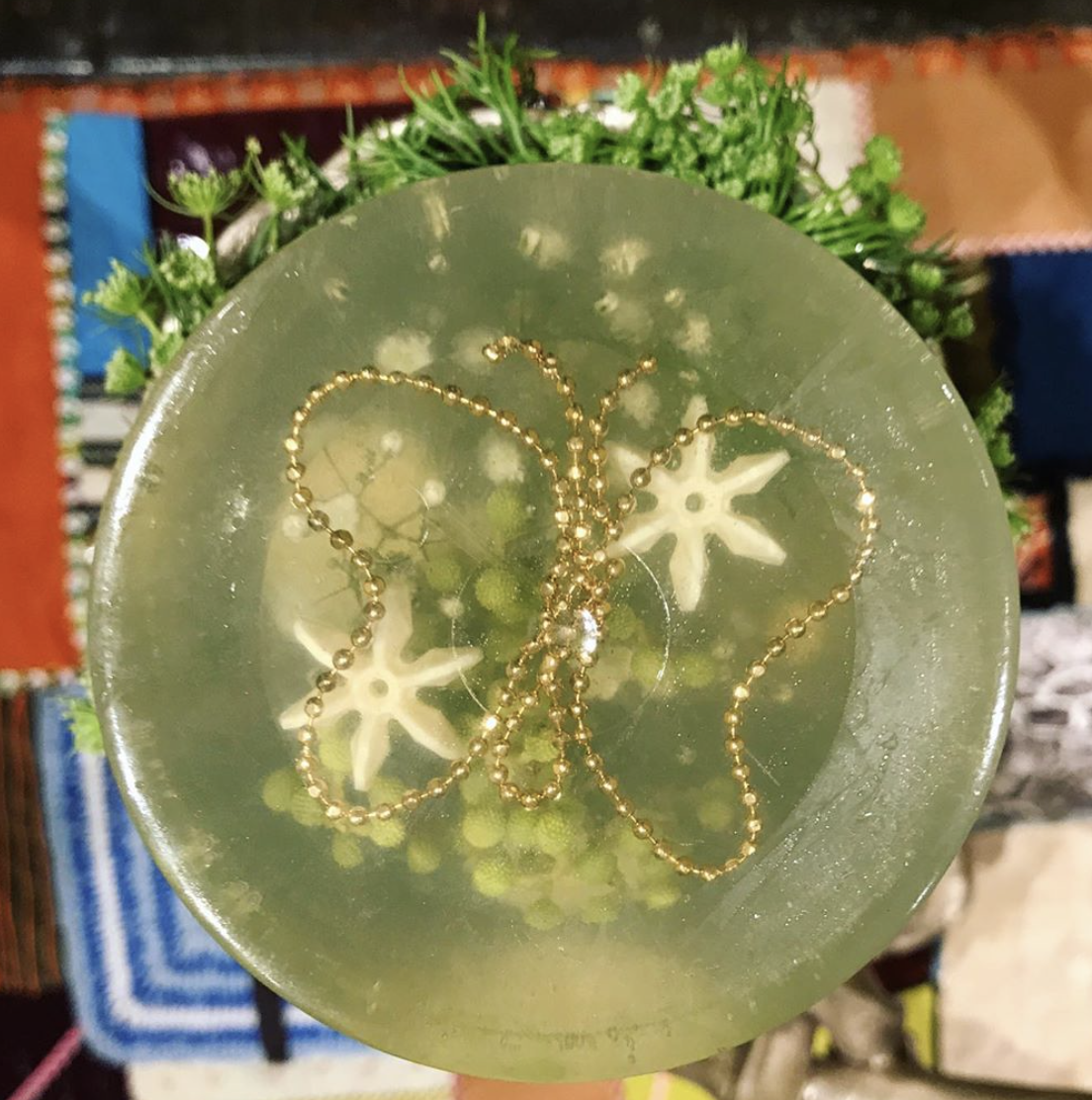 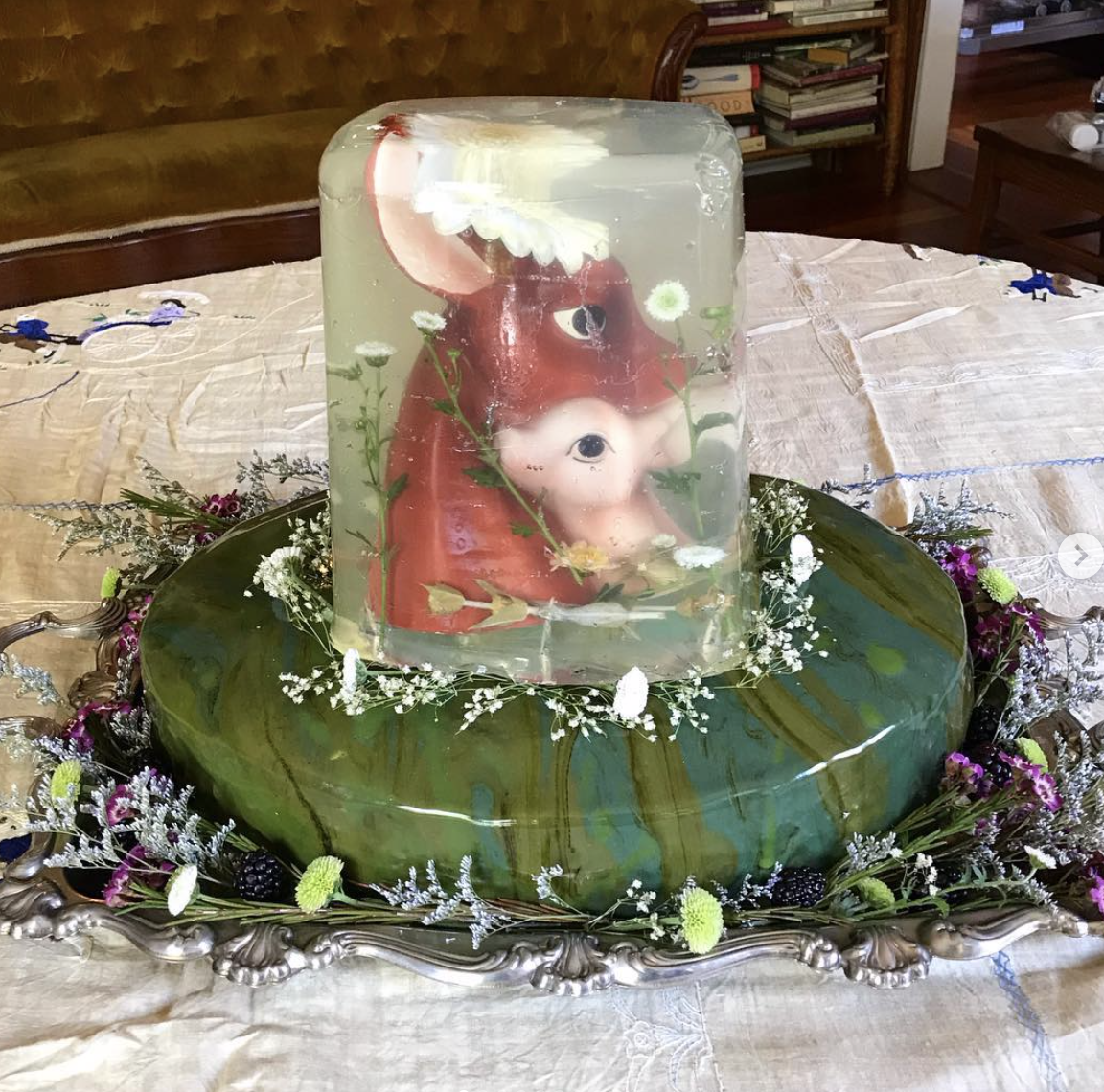 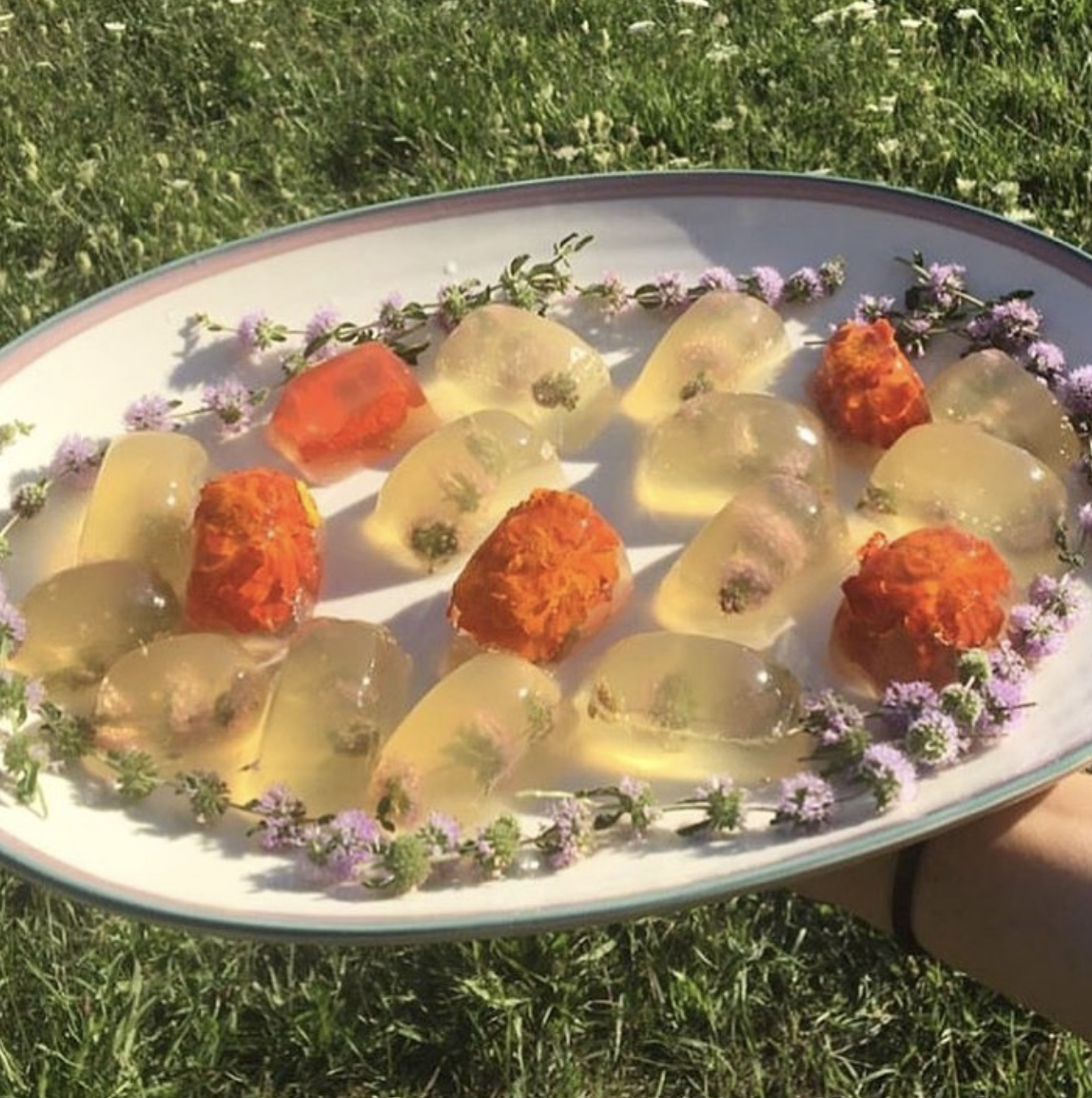 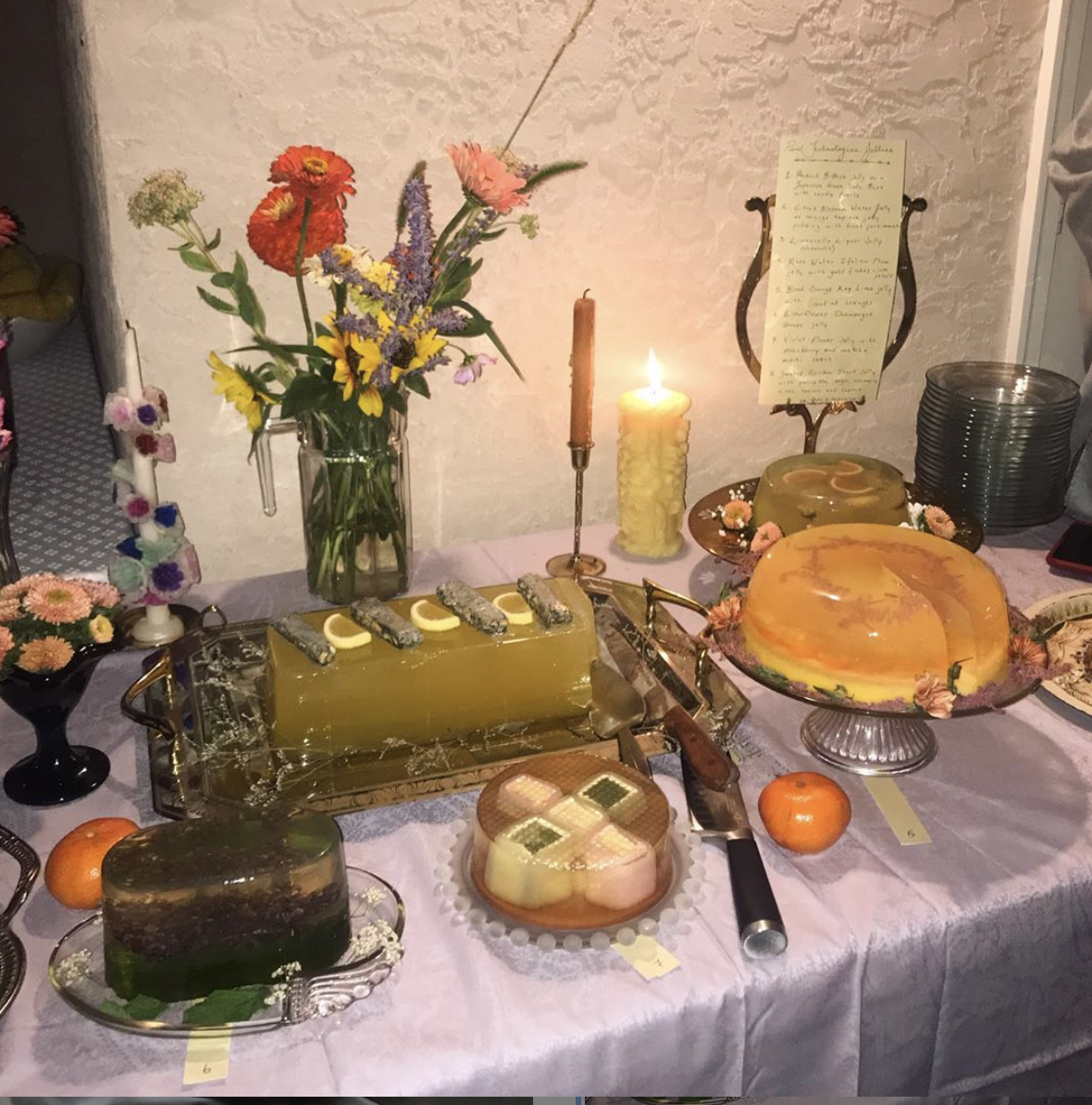 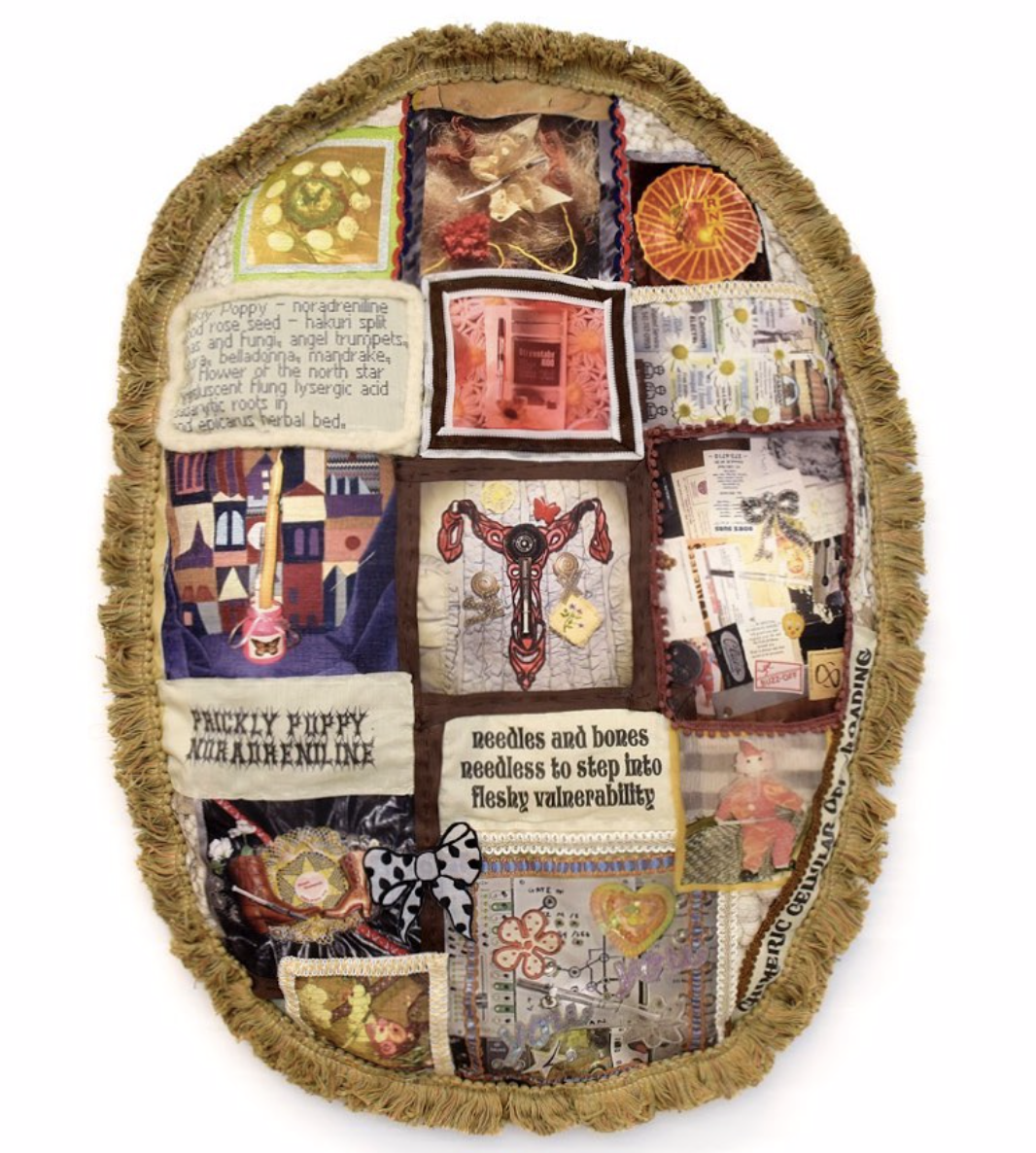 Part of your work (at least one piece comes to mind) seems to play on the visual contrast of ‘beautiful’ botanical elements alongside the ‘sterile’ medical images like syringes etc. How do you view the worlds of pharmaceutical vs natural medicines?
Did you feel the sort of stigma as a kid?
You’ve also talked about the idea of biocitizenship in some of your interviews. Can you explain a bit about the idea of biocitizenship?
How do you view the documentation of your work specifically your gelatin sculptural work given that it’s often viewed as photos on the internet?
‍
The pieces also don’t last very long. I make sculptures, but yes, a huge part of my process is photo-based. It’s been both positive and a drawback, because sometimes my work isn’t able to be photographed before the shows and then when you come back the next morning, sometimes they’re already molding. It really depends on the ingredients and the climate of the room, even how old the building is. When I have been fortunate to have my sculptures properly documented, that’s really helped my work. I’ve really wanted to document a time-lapse of the decomposition, because I’m interested in the temporality of our experiences, and especially the chronic illness experience. That was the plan for my most recent sculpture in New York, but then it got quarantined. I had to leave town and the sculpture is still in that gallery; it’s been there since February 28th!

How has your internet presence helped to foster a community or an audience, and how do you decide what to share with the world?

I had made ephemeral work for many years without documenting it. But eventually, I started trying to figure out why I was putting so much effort into something if it can’t reach other people especially the community you’re making the work for and about. When I first started sharing online, it was counterintuitive. I never wanted an iPhone...never had an iPod. But I’m so isolated in my home that I started seeing it as a possible vessel. It was a dramatic shift in perspective, as my worst fear was sharing my art and being judged, critiqued, disliked. Ultimately, I realized that wasn’t the point of my work, being liked. It was about sharing narratives that people hadn’t been exposed to. The first project I shared was a cybernetic photo performance, the New Psychedelia of Industrial Healing. It was about destigmatizing injection treatments, so I was making collages or bioaltars every 24 hours before I took my treatment. The goal was to do all of this in 15-45 minutes max. Some of that work was really weird, but after 90 [consecutive] days of posting, I was more comfortable. I still have anxiety about sharing things online, but I try to do it intuitively and to not deliberate too much. Putting something into the world can be a litmus test. Sometimes it helps me figure out if it’s [a subject or conversation] I want to continue to explore.

You run multiple Instagram accounts as channels for all the different things you make. What made you decide to separate these things?

My audience is super mixed, and I realized that if I have these different audiences, some people might be more into sculptures or cakes than seeing disability memes or talking about politics. So I divided my practice online: @hot.crip  and @paid.technologies. My @star.seeded account is more personal friends and people who just want to know about my day-to-day life. What’s interesting is that I’ve seen what my followers are interested in change. Sometimes they start with the sculptures, and then they end up following my memes.
I feel really lucky to have a practice where I can just do whatever, in a way. Being creative helps me cope with my circumstances. No matter my mood, I can still make work, and I have these different methods of making work. 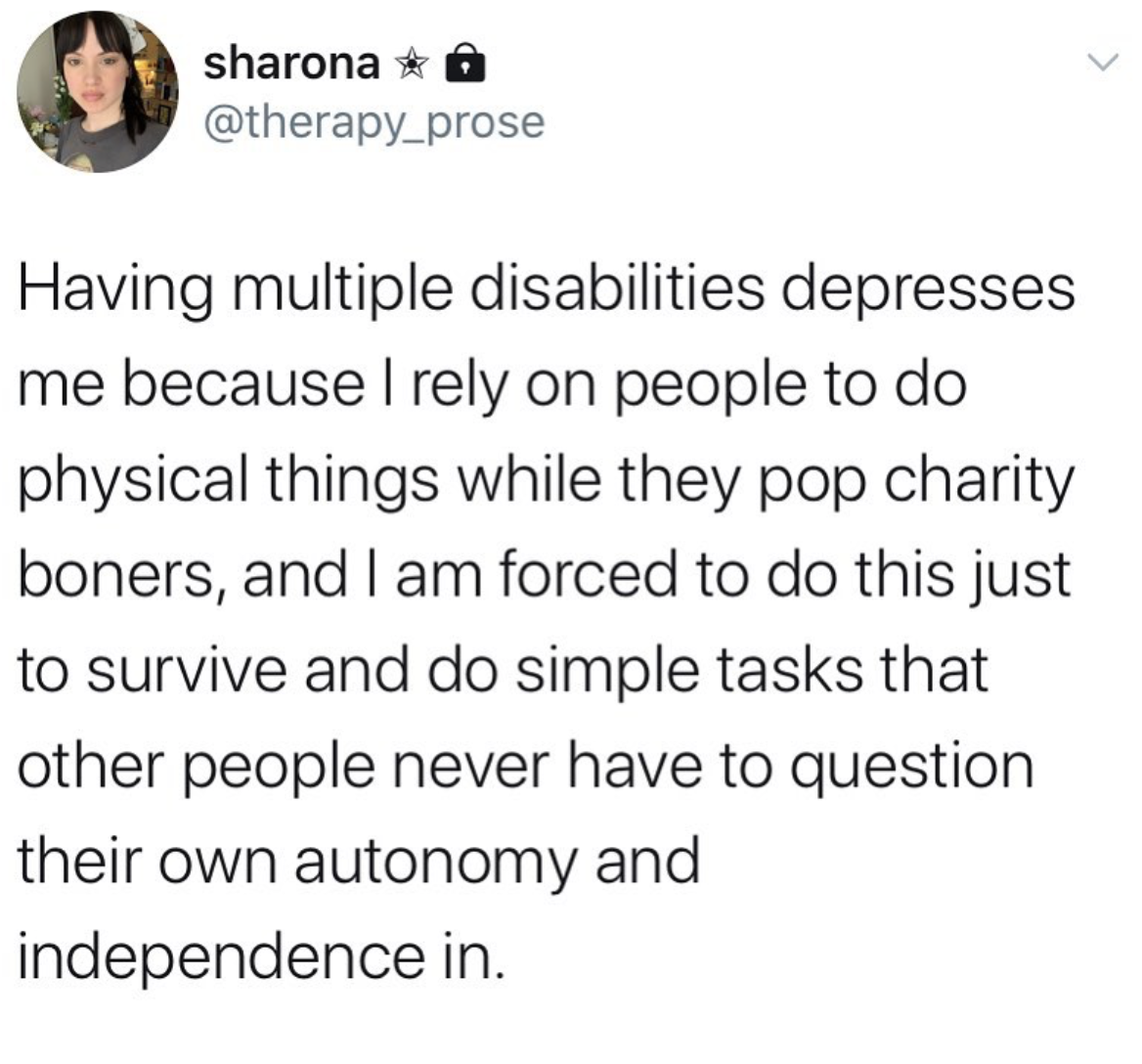 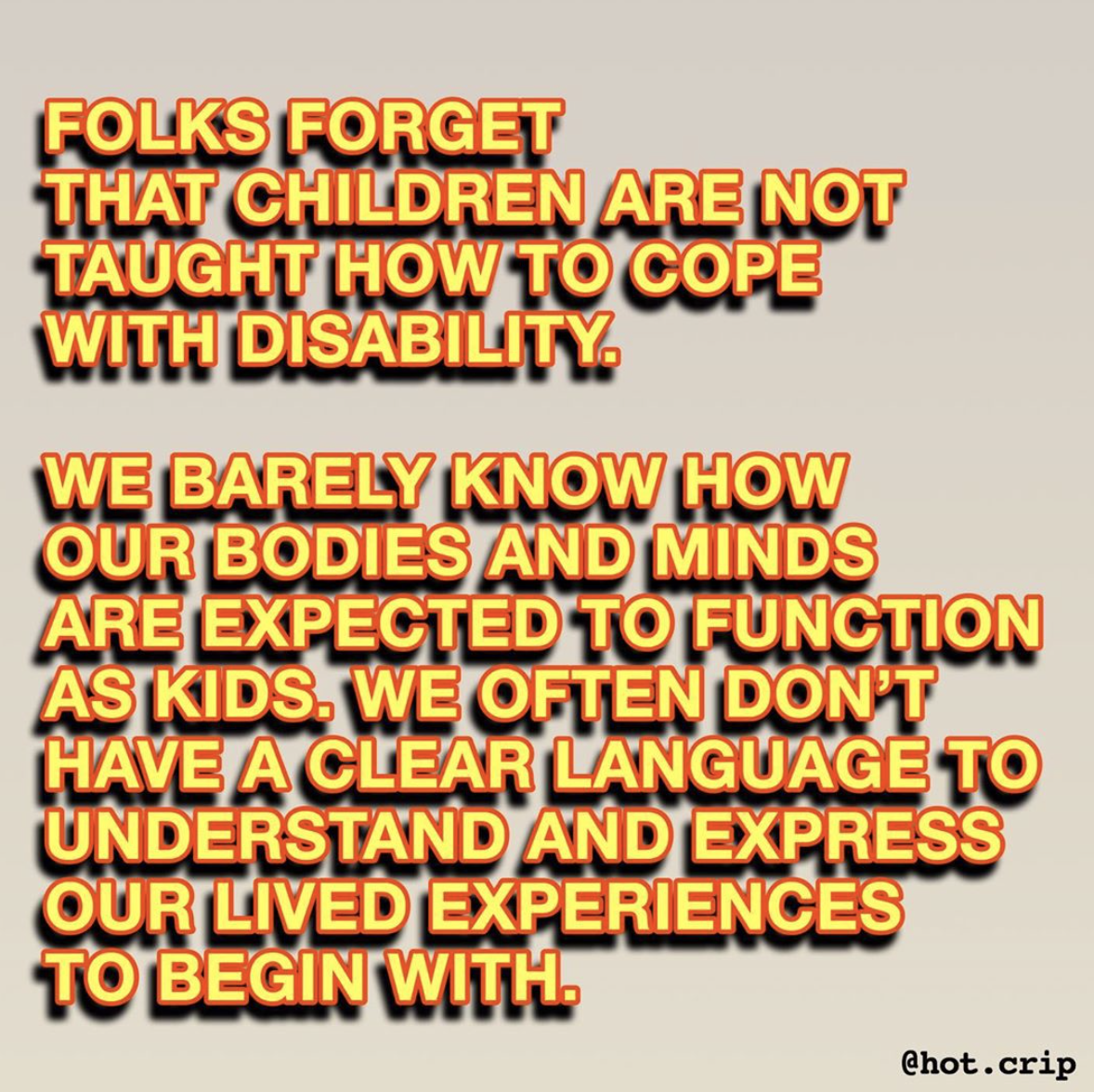 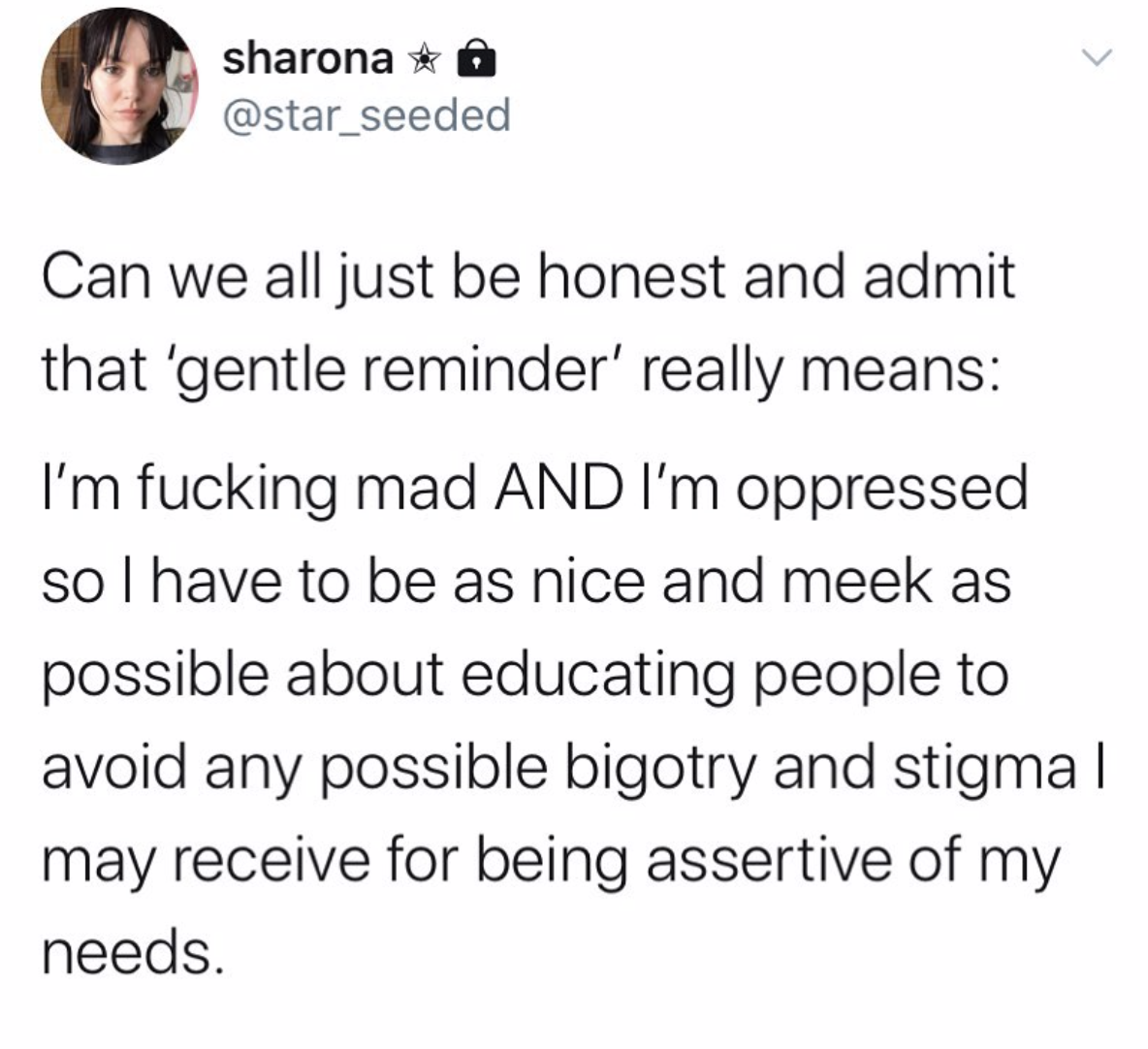 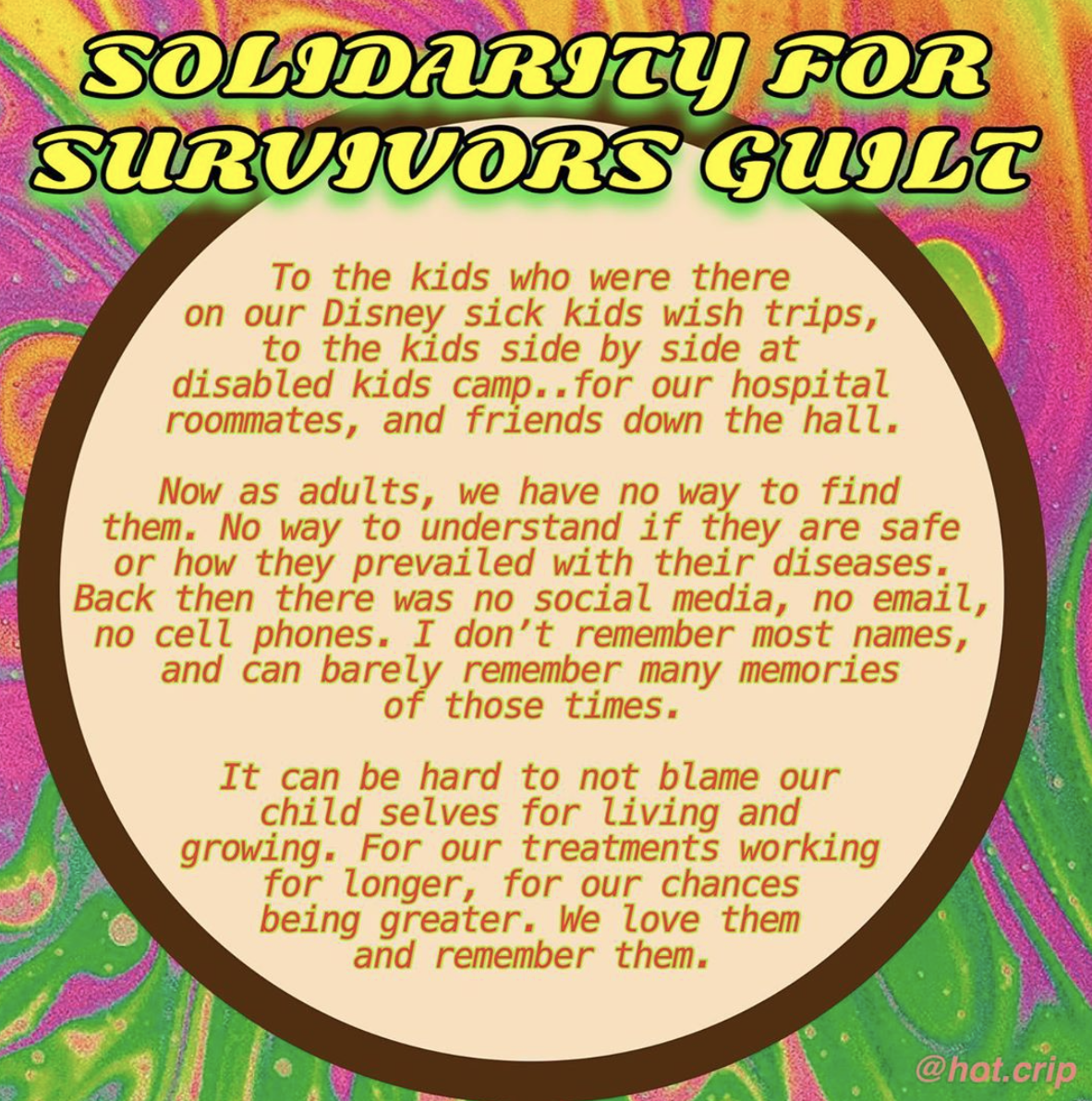 @Hot.crip is mostly memes or meme-adjacent images that comment on the hardships disabled people are facing. How do you see your role in the culture shift that’s happening around inclusivity and marginalized groups?

I never thought there would be a time when anyone in pop culture was talking about disability, acknowledging it or including it. A lot of people are upset that there is a capitalist drive to think about diversity, but I think it’s important that these conversations get out there. Nobody wants to be tokenized, and marginalized people do worry [about it] when they are sought out but you can tell when it’s happening because of how you are treated. So for people to interview me is pretty amazing. When I made @hot.crip, I didn’t think people would follow me. It was a therapy project for getting out thoughts that I didn’t want to talk about. If you make jokes about them, it just gets them out of your system. 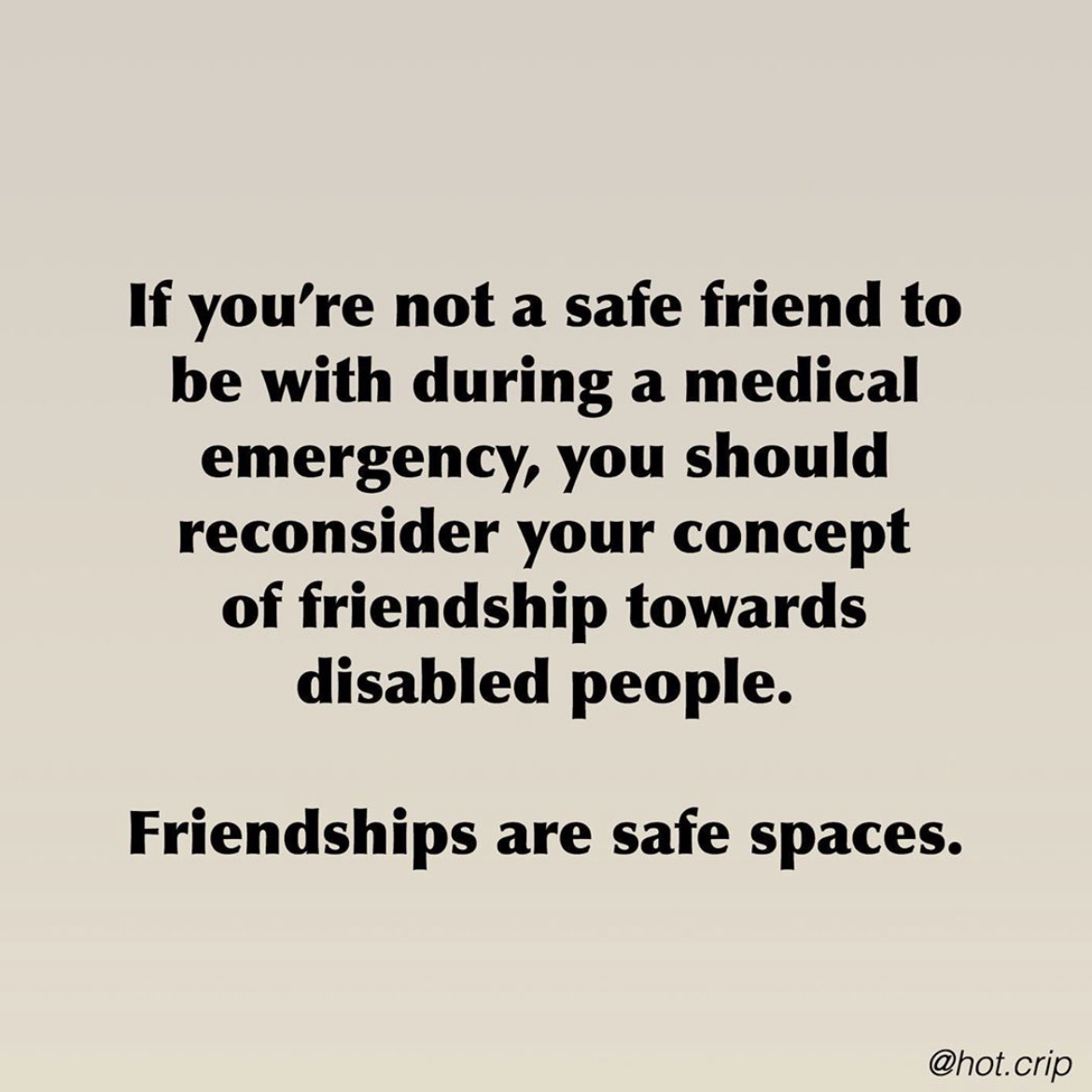 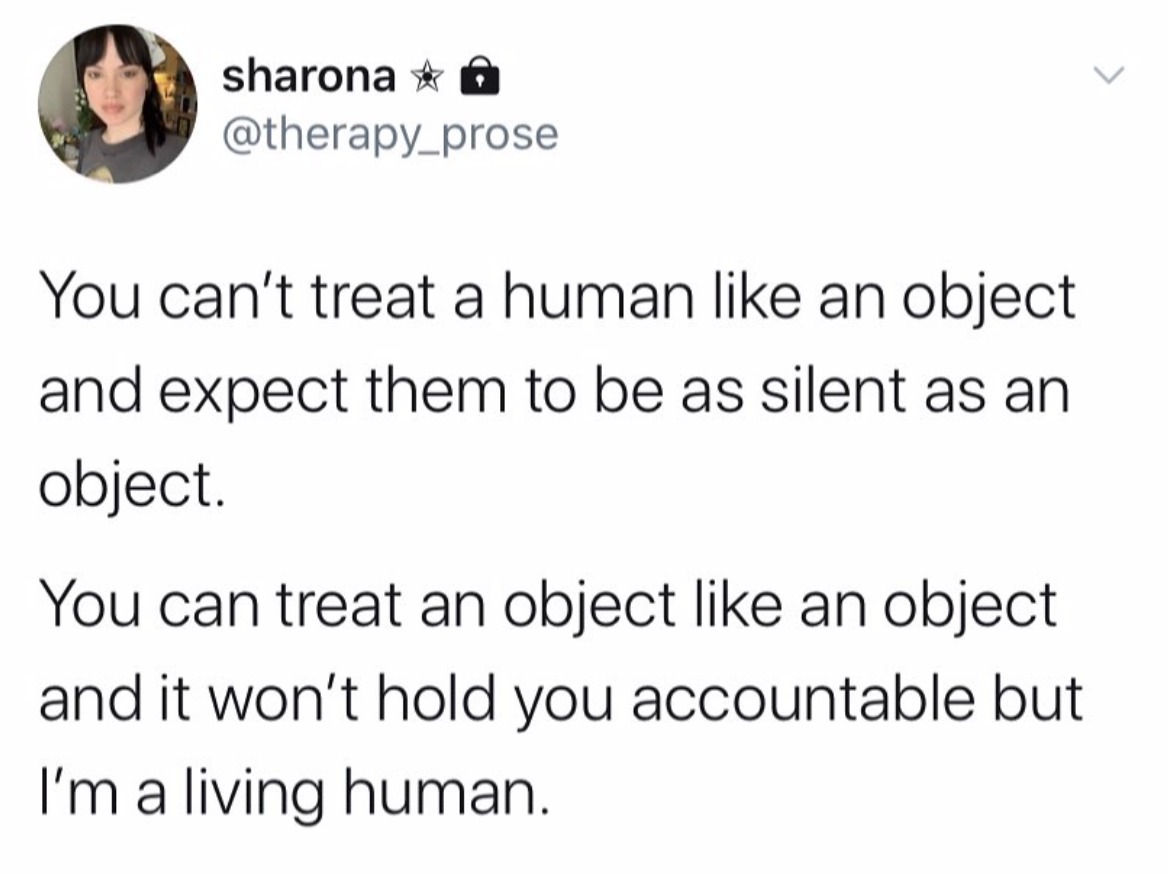 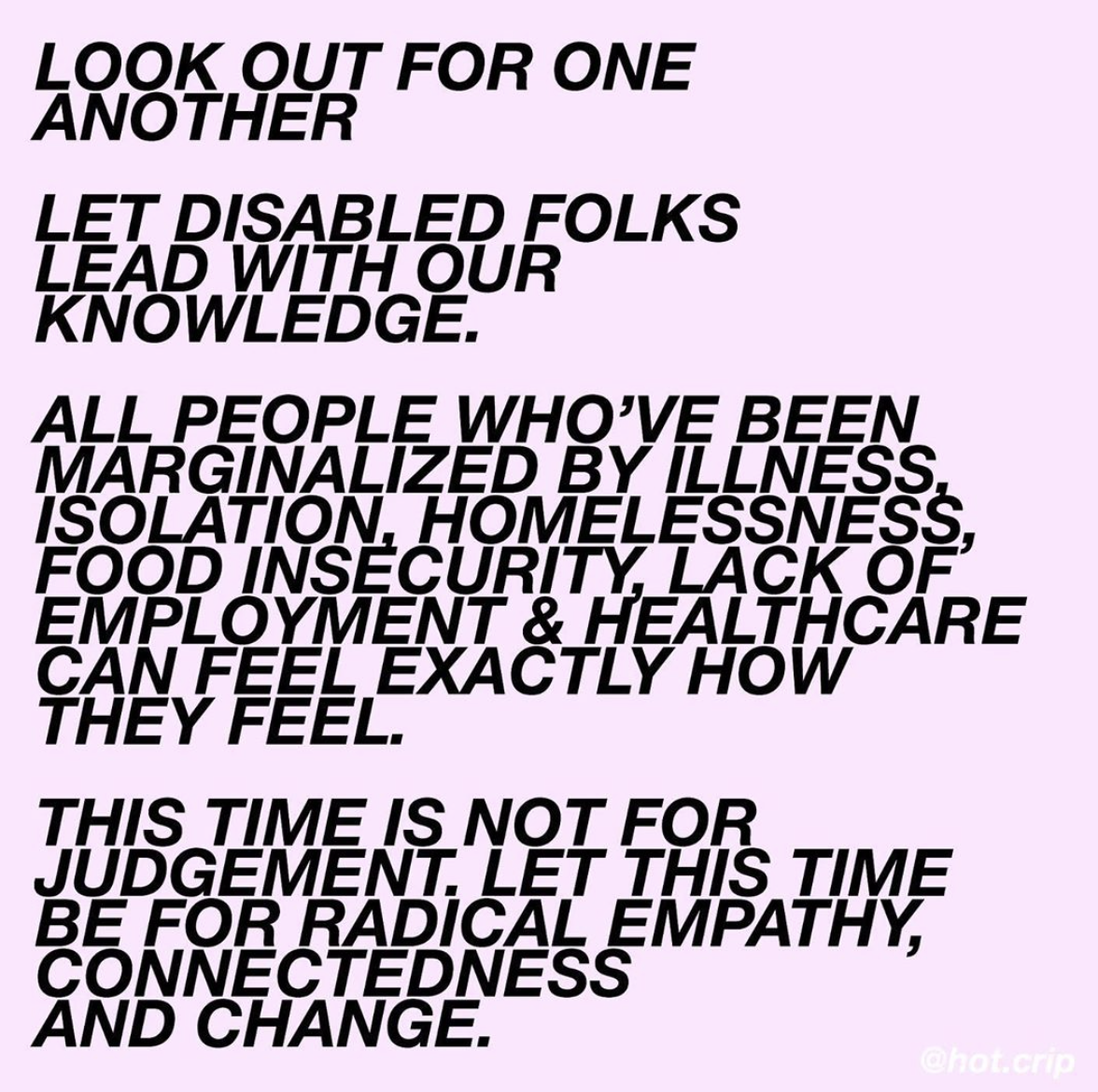 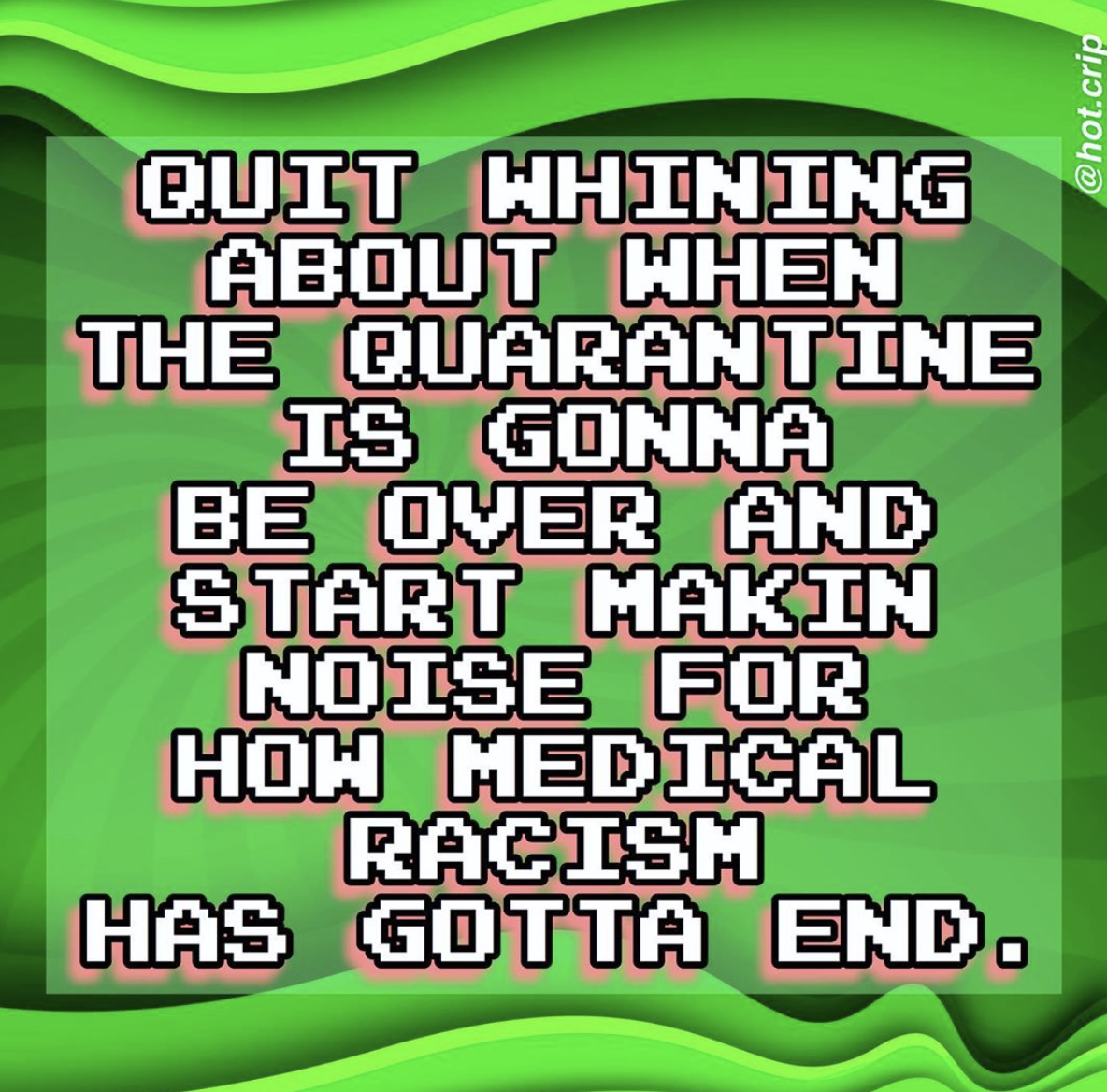 You have talked about the guilt imposed on you by being a seemingly “less productive” member of society, by taking measures to stay safe. It seems that everyone is now dealing with that same feeling now by having to stay at home. What is your reaction to this crisis sort of leveling the playing field?
Due to the Covid-19 pandemic, the public has been given a glimpse into the myriad of flaws of medical institutions globally. Is there now a greater understanding/ sympathy for what a disabled person’s life is like, or has it only brought to light ableist ignorance?
Do you ever wish that your work could be removed from your lived experience?

I do wish that sometimes. My previous work included graphic design, curating, throwing dance parties, music shows or dinners. But at that time, I also wasn’t open with people in my life about my experience. So, now that I share a lot more, I don’t know if it would be possible. I think it’s important that people remember that production from a disabled body is often through a different means. Before people knew what my day-to-day experiences were, they expected a lot. They didn’t know what I had to do to prepare, or that afterward I would be bedridden with swollen joints. Now that I’m open about my barriers, people are a lot more supportive.
DONATE
For more information please email: asantelli@thebillboardcreative.org