The Largest Gallery in Los Angeles

A conversation with the Hammer Museum's
Made in L.A. 2020: a version
curators Myriam Ben Salah and Lauren Mackler

We at The Billboard Creative are delighted to share our collaboration with the Hammer Museum on the production of this year's acclaimed biennial show, Made in L.A. 2020: a version. The exhibition was conceived with the concept of complementary presentations of the show at both the Hammer and The Huntington Library and Museum, as well as several offsite installations embedded within the city. The Billboard Creative co-produced a series of billboards as part of these satellite shows.

The artist whose work was selected for the billboard component of the show, Larry Johnson, has long dabbled with subverting familiar images of advertising and American consumer culture, thus making him the perfect candidate to explore the billboard as a medium. Johnson began as a student of graphic design at the California Institute of the Arts before developing his practice into a more conceptual framework. However, he took what he learned about pre-digital “paste-ups” (the analog method of creating publication pages that predates the use of computerized page design) and incorporated it into his work in a way that deconstructs the familiar format and reveals a uniquely idiosyncratic mix of text and image. Images and text are stripped from their context and jumbled into a transfiguration where Johnson’s often witty and humorous observations on the entertainment industry, and the like, are cleverly unveiled.

To take a deeper look at Made in LA 2020: a version, The Billboard Creative arranged an interview with the guest co-curators of the exhibition, Myriam Ben Salah, and Lauren Mackler who organized the biennial with the Hammer’s Ikechukwu Onyewuenyi, assistant curator of performance.
MacArthur Park Aerial Footage
Audio Recorded - Wednesday, January 15, 2:37 pm

Lauren Mackler ..."These two far-reaching poles of the Hammer Museum and The Huntington, all the way in Pasadena, allowed us to really consider the physical and conceptual space in between, which is where the billboards lie."

CAN YOU TALK ABOUT THE GENERAL IDEAS BEHIND THE CURATION OF THE 2020 MADE IN L.A. SHOW?

LM: “Made in L.A., as a project, has this mandate of being a survey of art happening in Los Angeles now. But very early on in our process Myriam and I connected in being interested in making an exhibition in addition to a survey--by which we meant certainly identifying artists that live and work in Los Angeles now, but also selecting artists we could present together that would make these connections in a gallery—that would allow for underlying currents or threads and conceptual through lines to be excavated out of the work placed together in the galleries...to propose a larger idea.”

MBS: “Once we went through the process of studio visits, visiting about 300 artists in the city, we got a better picture of the general threads and things started to emerge. One of these threads that helped us build the exhibition was entertainment. Not only as an industry, but also as a set of tools or tactics that artists can use in their work, or to broadcast their work, or to hijack in order to reach a broader audience, which definitely has something to do with what we’re talking about here with The Billboard Creative.

One other thread was the aesthetic of horror and how it was being reconfigured by artists. The more traditional tropes of horror were kind of transforming and were having to do more with the invisible, or things that weren’t necessarily visual. It’s a thread that has shifted throughout our process, because we found ourselves in the pandemic, which is a pretty intense form of horror.

The final thread is this idea of the fourth wall, which is a tool in theater to build fiction and suspend the disbelief of viewers. We were interested in considering the fourth wall in the context of an exhibition...how to upend the museum apparatus and make the position of the viewer in the space of the artwork shift. We wanted to make the fiction visible, both inside and outside the exhibition, and again, this has a lot to do with the project that we initiated with The Billboard Creative and Larry Johnson.”

LM: “When we were given the opportunity to work with two institutions, we started thinking about having a mirror exhibition, so a show that would have all 30 artists at the Hammer and the Huntington—stressing the exercise of exhibition making and the permutations and connections that can be made between the artists, but also, the various lights in which an artwork can be viewed, depending on the context. These two far-reaching poles of the Hammer and the Huntington, all the way in Pasadena, allowed us to really consider the physical and conceptual space in between, which is where the billboards lie. So in addition to the undercurrents that Myriam was just referring to, we had this kind of conceptual approach to thinking about populating the space in between the two venues.”

WHAT DRAWS YOU BOTH TO SITE-SPECIFIC INSTALLATIONS & NON-CONVENTIONAL EXHIBITION APPROACHES?

LM: “Based on the work that I had been doing before, Public Fiction, I’m generally interested in the way in which art and ideas can be articulated across a lot of different platforms. Through the project Public Fiction and past projects, I’ve been interested in what needs to be seen within an institution or an art context versus what can be seen outside of that. Coming to Made in L.A., one of the first thoughts I had was how could it really engage with the city of Los Angeles at large? I just saw so much potential for it to kind of slip into the city itself, and engage with the many great communities all across the city.”

MBS: “I think because I don’t come from a traditional art history background, I’ve always been questioning the museum and the sacralization that happens within the white cube/white space. Because I wasn’t coming from that background,  I was given the periphery of the museum when I was younger and starting to work around contemporary art. It was like, ‘Ok, you can take care of the projects that are on the margins, that are outside’. I found it interesting to figure out what art became when it was outside of these spaces, when it wasn’t sacralized anymore or contextualized within something that is very specific. I think we met each other on that point, where we were really fascinated by what could be outside of the museum and why it should or shouldn’t be there.” 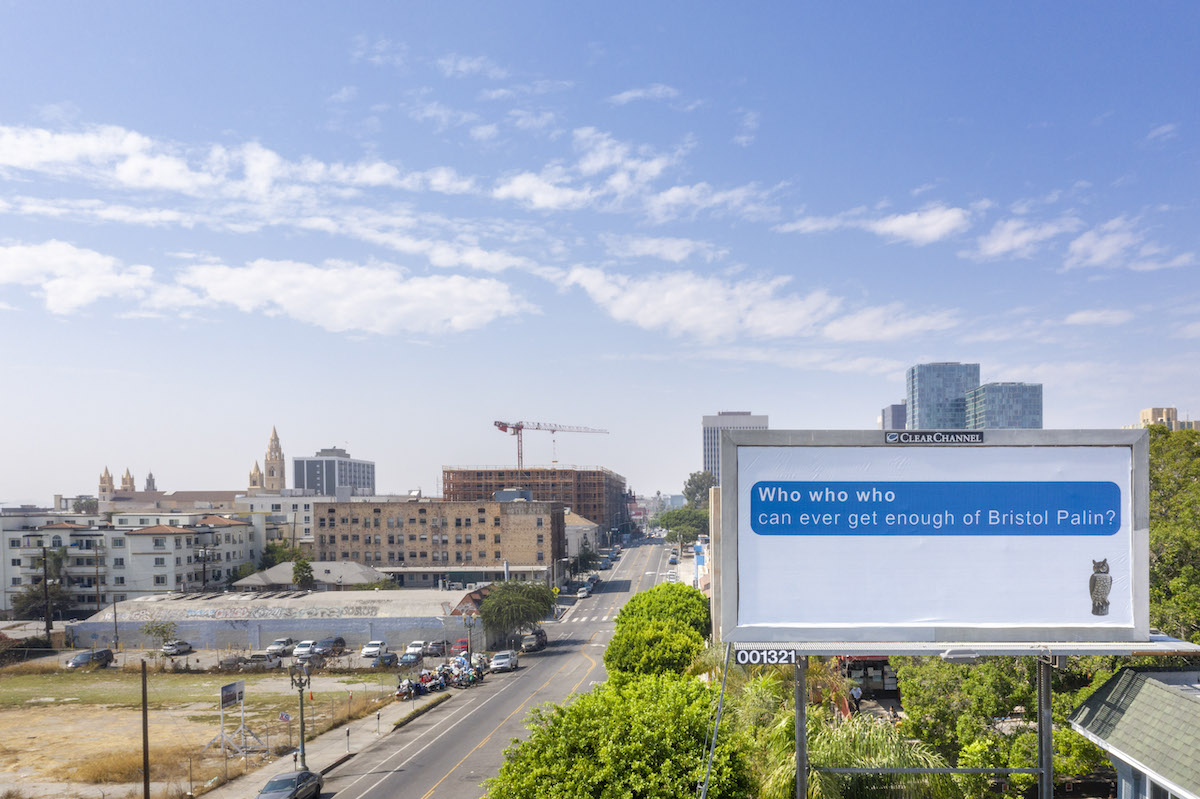 Image by Joshua White curtesy of the Hammer Museum
VIDEO Q&A:
‍
THE MADE IN L.A. SHOW REVOLVES A LOT AROUND THIS IDEA OF MIRRORING, WITH DIFFERENT PARTS OF THE SHOW APPEARING ACROSS THE CITY. CAN YOU EXPLAIN WHERE THE IDEA CAME FROM TO STRETCH THE SHOW OUT BEYOND THE HAMMER?
VIDEO Q&A:

CAN YOU TALK ABOUT LARRY JOHNSON’S CONTRIBUTION TO THE SHOW AND WHERE THE IDEA FOR INCORPORATING BILLBOARDS CAME FROM? WAS THAT ALWAYS PART OF THE INITIAL SHOW CONCEPT, OR DID IT COME AS A WORK AROUND DURING COVID? 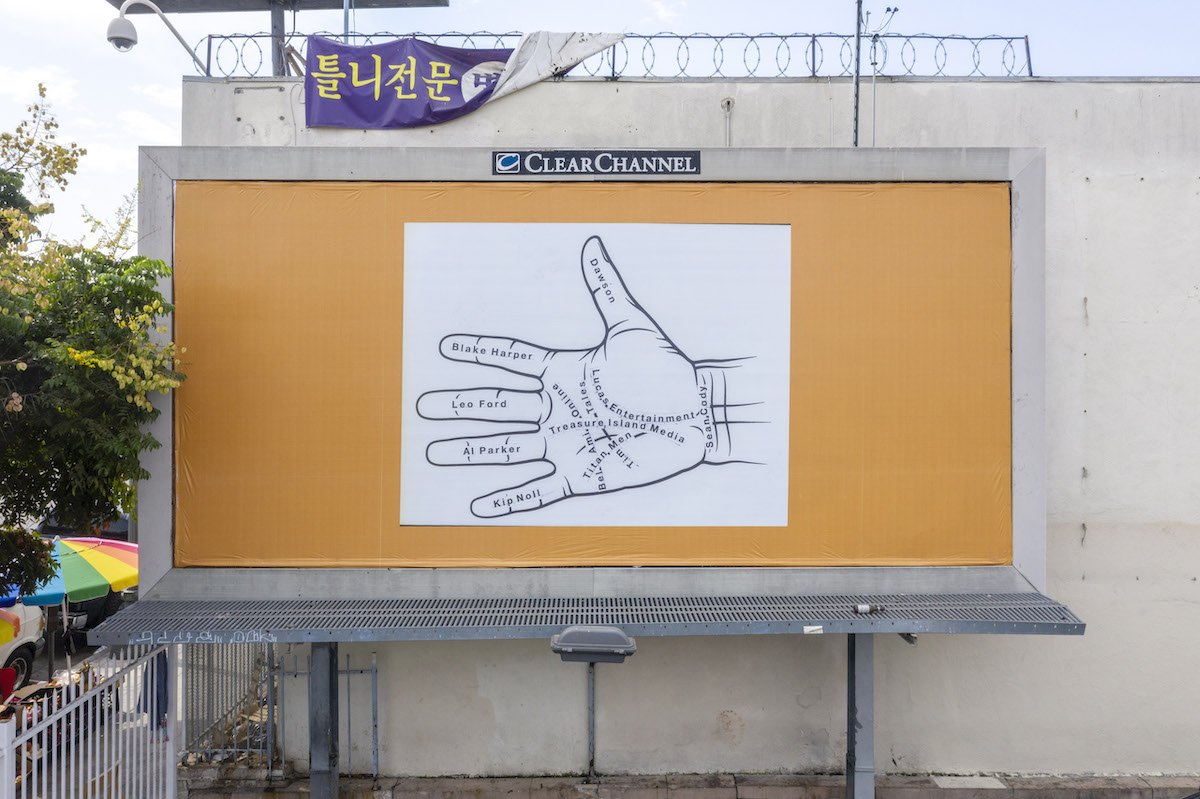 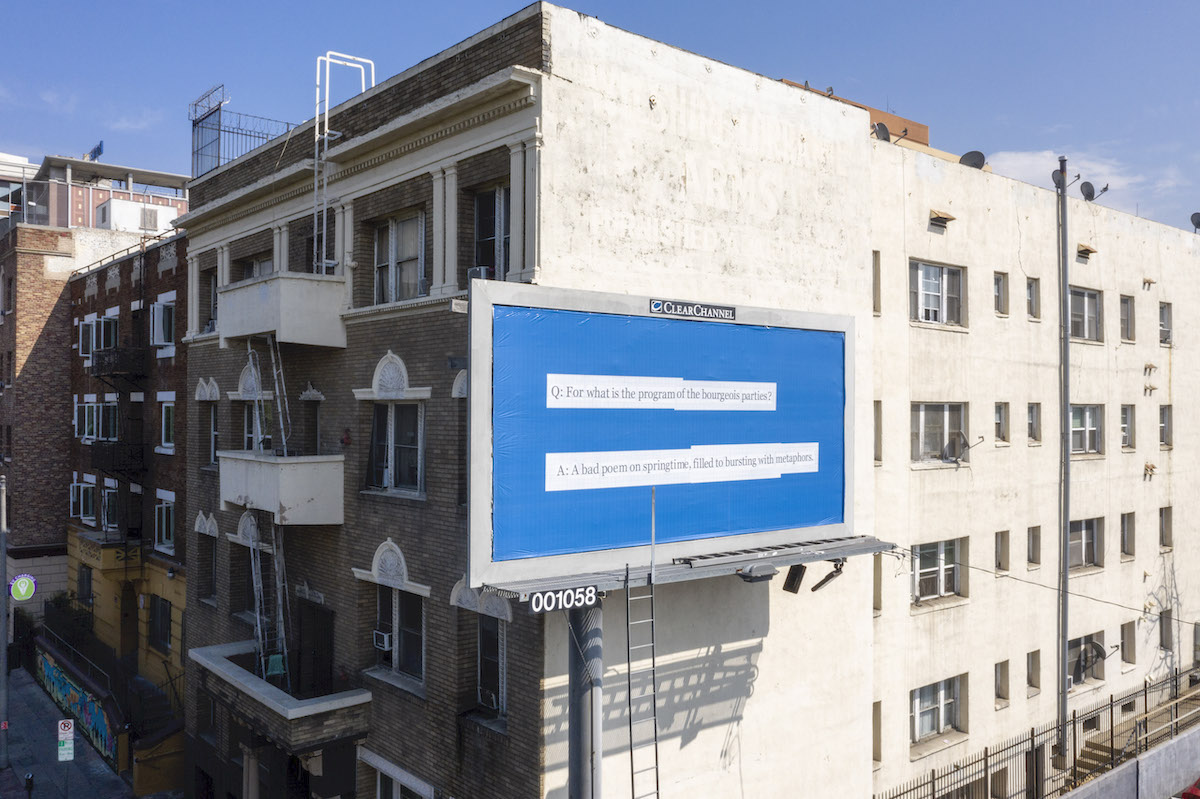 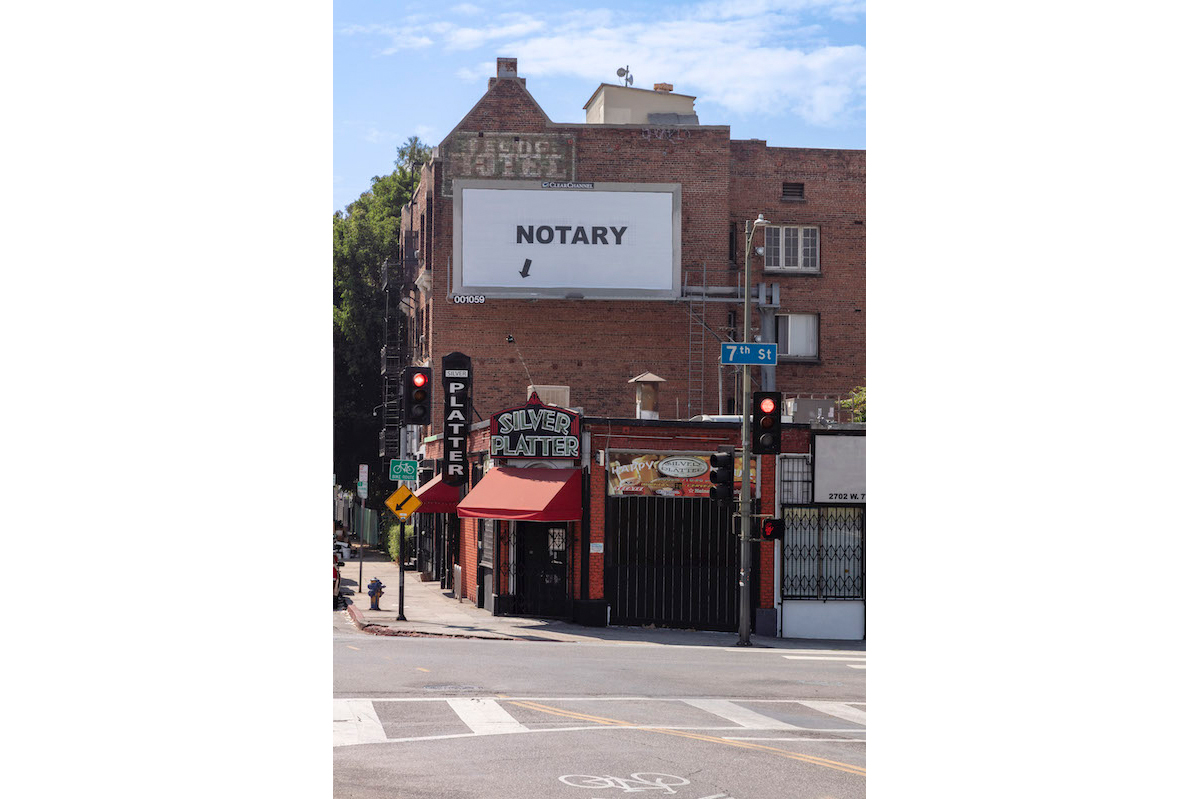 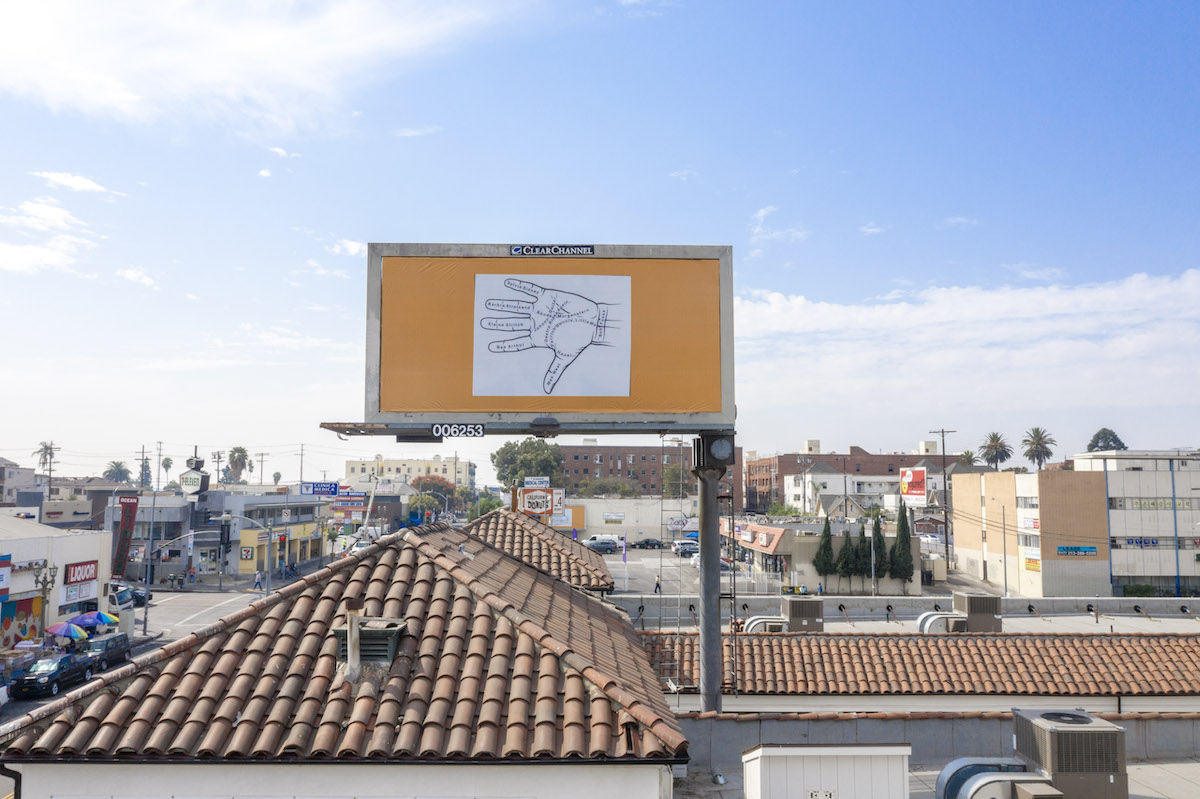 Images by Joshua White curtesy of the Hammer Museum

WHY DID YOU PICK MACARTHUR PARK FOR LARRY JOHNSON's work, RATHER THAN A MORE TYPICALLY “ART-CENTRIC” NEIGHBORHOOD?

MBS: “ Actually, the fact that MacArthur Park was not an ‘art centric’ neighborhood was part of the choice as well, because we wanted things to live in the city in a way that wasn’t similar to being in a museum. But at the same time, I don’t know if LA really has a real art center.”

LM: “I would say that, arguably, MacArthur Park is kind of ‘art centric’. The history of CalArts and Otis being there and, also, artist studios which have been there for a long time and all these new galleries. I think, in a way, it does feel kind of local and close to Larry’s heart and his day-to-day.”

THERE’S A BIG ELEMENT OF LARRY JOHNSON’S WORK THAT PLAYS OFF OF COMMERCIAL OR ADVERTISING LANGUAGE AND IMAGES. WHAT DO YOU THINK IS THE SIGNIFICANCE OF PUTTING THAT WORK INTO THE CONTEXT OF A BILLBOARD?

LM: “I think that’s probably why Larry was excited about the platform. The idea of signage was one he wanted to work with anyway, and it's why the context played such a big role in the way that the artwork is read. It just added to the framing of the way in which you look at this work and allowed it to riff of its relationship to advertising even further.

MBS: “I think, for us, it really made sense in terms of the ‘slippage’ that we were talking about earlier. The slippage of the fiction of the exhibition within the reality of Los Angeles. There is a little bit of a hijacking. You read it as something you know, but it’s actually something you don't know. We were interested in having that puzzling situation created by having these artworks on commercial billboards. It’s like a little gift in disguise, somehow. And the fact that we didn’t have an indication on the billboards was really important for us. No logo. No Hammer logo. No Billboard Creative. Nothing. It was really important for us that the artwork would act as advertising content.”

LM: “Because in that sense, that would have made it marketing. The reason why we were pushing back so much against hashtags or way-finding was because, if we had used it in that way to point you to the museum, then that would have been co-opting the artwork as marketing, but the idea was really to preserve the integrity of the work on that space.”
DONATE
For more information please email: asantelli@thebillboardcreative.org